The Soldier and The Author Where is My Happy Ending? 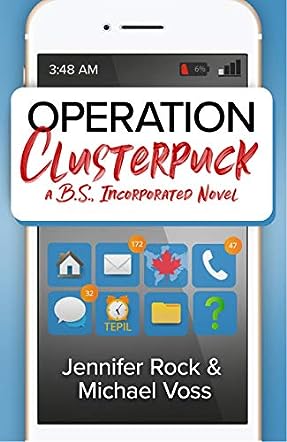 Operation Clusterpuck: A B.S., Incorporated Novel by Jennifer Rock and Michael Voss is a rollicking ride that melds corporate intrigue, romance, and humor to create a spellbinding narrative. The opening grabbed my attention, a sterling promise of the humor that awaits the reader: “The IT guy snored in the corner conference room, sucking each breath through his nose with the ratchety whine of a dot matrix printer.” And on every page, the authors capture images and emotions, describing actions, and exploring thoughts of characters caught up in the web of corporate life, and they do so with style, with skill, with a hilarity that forces readers to pay attention to their characters and to the drama that unfolds through each page.

BSI is expanding, but the company is also hit with tragedy, and the new venture could make or mar the reputation of the company. The change that comes with it puts in motion a chain of events that are about to affect many employees — from top to bottom. This expansion doesn’t go down so well with the BSI communications director, Will Evans, who is just getting settled into his role and whose heart is already throbbing for Anna Reed. Does he have what it takes to tread uncharted ground and handle Anna’s devious ex?

Anna is a sophisticated character caught up with romance in her office. She has secrets in her past that are quickly emerging, but her work isn’t easy. Lyle Kirkland, the undersized exec, has just become the interim CEO of the company and may have sinister plans, and the only person who stands a chance to save the company from him may be Anne. This narrative is fraught with drama, exciting dialogues, and gorgeous prose. The authors display a great handle on corporate life and procedures and the use of the epistolary style augments the entertainment potential of the novel. Operation Clusterpuck: A B.S., Incorporated Novel is a beautiful story beautifully told, a story that plunges readers into the soul of corporate life with its challenges and perils. Fast-paced and a hugely satisfying read, it’s first rate entertainment.