Orwell, Two Guinea Pigs, A Cat and A Goat and Other Essays 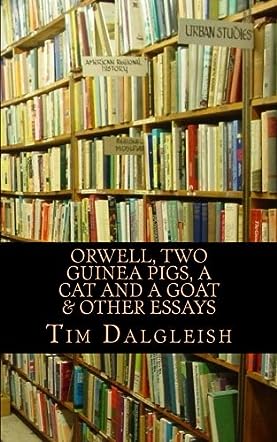 As the title more than hints at, Tim Dalgleish’s Orwell, Two Guinea Pigs, a Cat and a Goat and Other Essays is an eclectic and wide-ranging collection of writings by the British playwright-poet-essayist-editor and actor. In the more than two dozen pieces comprising the book, Dalgleish tackles such varied topics as the famous anthropological Piltdown Man hoax, the juncture of art and philosophy in American movies, the history of the Welsh language, traces of a near-vanished kingdom, Mahatma Gandhi, Tom Paine, Oscar Wilde, George Orwell, and the missing Malaysian Airlines plane, just for starters. In brief introductory remarks that precede each essay, Dalgleish shares with the reader something of the piece’s history (some are previously published magazine articles, some book reviews, some posts from a blog he maintains).

In my opinion, Dalgleish is a thorough researcher, an original thinker, and an erudite writer whose essays can be counted on to offer readers fresh facts or unexpected linkages on every page. The breadth and depth of the works make for a potpourri that can be enjoyed in short bursts as much as a cover-to-cover reading. On the one hand, this is a book that invites the reader to dive in at any point, whenever a title piques his or her interest. On the other hand, though, the stitching together of so many different pieces sometimes results in essays that repeat information from previous entries. This happens, for example, in some of the several essays devoted to George Orwell, a “literary hero” of Dalgleish’s. However, overall, I found this collection is consistently engaging and instructive and likely to capture many readers’ interest.