Blood on the Mother Road How to be a Buddhist Millionaire by Diane Trull with Meredith Wargo 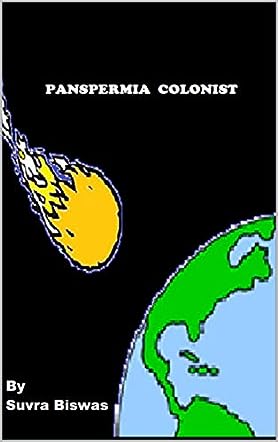 In Panspermia Colonist by Suvra Biswas, a viral brigade of Covids escape a black hole and plan to colonize our solar system. We meet their Master (Crutzfield), the Navigator (Kaposi), the Scientist (Epstein), their Earth contacts Covid (Uncle Gilbert), and sundry other characters who come and go. The Master tells the story of Vampire, Zombie, and Runaway stars, gamma rays, cosmic flares, strangelets, and other cosmic phenomena. The plot begins when the Master concocts a plan to invade our solar system. The year is 2040, some twenty years after a former attempt was made and defeated by humans, leaving the Covid world with an overpowering thirst for revenge. A small force of Covids survived the harsh treatment by humans and are hiding out on Earth, awaiting the invading force to exact revenge. Catching a danger-fraught ride on a runaway star, the invaders head through the Milky Way toward Earth.

I was fascinated by the trip the Covids make once they reach the Kuiper Belt and face the challenges, both beautiful and horrific, of our solar system’s planets and moons. Author Biswas teaches us about the chemical and atmospheric conditions of each body as they forge ahead. At the same time, Uncle Gilbert waits here on Earth, having survived the initial attack and planning what can be done to ravage the human anatomy, eventually deciding to penetrate our interstitium, the interconnected mesh (compared to dark matter) serving as the scaffold of our nervous system. In the meantime, amid the invading force, a murderous rivalry develops between the Navigator and the Scientist. The survival of the human race is in doubt. Panspermia Colonist by Suvra Biswas explores the Covid Pandemic as if the virus has a human-like consciousness and has arrived from outer space in an attempt to rule our solar system. The plot, along with illustrations and photographs, teaches us much about the structure of the universe and about human anatomy.