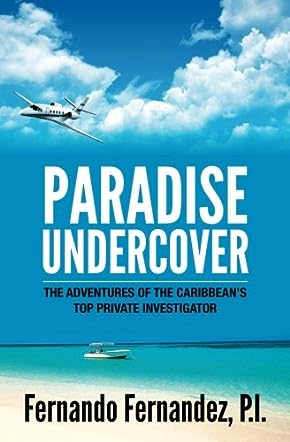 Fernando Fernández, PI, BAI, CCDI, CII, CAS is a Licensed Professional Investigator with over 10 years of experience in private and forensic investigations for private clients, attorneys and law enforcement cases in Puerto Rico, The Caribbean, and the US. His firm, Covert Intelligence, provides remote services to international clients like Attorneys, Insurance Companies, and other investigators, as well as servicing the local general public. Fernando Fernández specializes in missing persons, computer forensics, fraud investigations, online crimes, and surveillance, among other services. He belongs to more than five professional international associations and was nominated for the World Association of Detectives Investigator of the Year Award in 2013 and 2014.

Paradise Undercover: The Adventures of the Caribbean's Top Private Investigator is a private investigator mystery novel written by Fernando Fernandez. The collection of sleuthing jobs contained in this book are fictionalized versions of the author's own cases. He's a private investigator based in Puerto Rico, but his cases have taken him to other Caribbean locales, as well as to the United States. When the reader first meets Fernandez, he's conducting surveillance of a husband whose wife is convinced he's cheating on her. This covert operation takes a hilarious turn when the beleaguered, bored and desperate detective attempts unsuccessfully to relieve himself at the same time that a pack of dogs descends upon his minivan, and a police car pulls up behind him with roof lights flashing. So much, he thinks, for covert action, but, to his surprise, the subject of the investigation actually leaves the house with his girlfriend and continues romancing her in full view of the surprised private detective and his camera.

Fernando Fernandez's private detective novel, Paradise Undercover: The Adventures of the Caribbean's Top Private Investigator, is fascinating reading. How does an IT person end up as a private eye? Fernandez's stories show just how much brain work and resourcefulness is needed for a successful independent sleuth to survive, and it quickly became apparent to me that the two occupations - though quite different - would require similar intellectual skills, along with a healthy dose of native curiosity and ethics. I enjoyed and appreciated the wide range of cases that the author describes in this book. There's that initial mundane domestic investigation, but then the action heats up as Fernandez investigates corruption in high places and braves locations where lives are casually disposed of. There's also a satisfying amount of humor to be found within these pages which adds a whole other dimension to this very authentic and human novel. I had a marvelous time reading about Fernandez's exploits, good deeds and adventures and hope to see further works by this author. Paradise Undercover: The Adventures of the Caribbean's Top Private Investigator is most highly recommended.

A tell all account by an elite investigator and his prowess solving complex investigations.Kudos to my good friend Fernando!