My Monster Truck Goes Everywhere with Me We the Wild Things 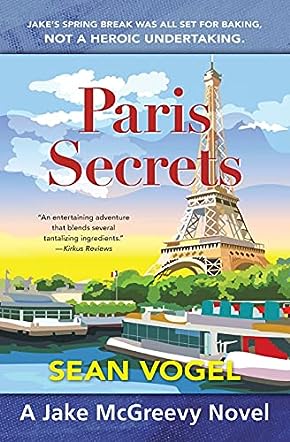 Participating in a baking contest in Paris, two boys become entwined in a mystery dating back to World War II in the exciting middle-grade adventure novel, Paris Secrets (A Jake McGreevy Novel) by Sean Vogel. Jake McGreevy and his best friend, Ben Meyers, are spending spring break in Paris. Bringing an old family photograph taken in Paris, Jake wants to locate the place it was taken. Searching for the neighborhood where the picture was taken, Jake is thrilled when they find the building and stumble upon Sophie, a cousin his age, and Esther, his late grandmother's long-lost sister. While getting acquainted, they discover that Esther possesses an identical photograph with the same enigmatic message written on the back. His great-grandmother Dahlia played a significant role in an underground movement during the Nazi occupation of Paris. Believing the message may hold a clue to the location of valuable and cherished items, Esther thinks she knows where to look and accompanies Jake, Sophie, and Ben to the site. Unfortunately, the area is under construction, and when they try to enter, the police threaten them with arrest. Despite the policemen's efforts to hinder their investigation and a stalker tailing them, Jake, Ben, Sophie and several new friends are determined to uncover the secret behind the message written on the back of the photograph. Can they do it before Jake and Ben have to leave?

Filled with fascinating historical facts relating to the Nazi occupation of Paris, Paris Secrets (A Jake McGreevy Novel) by Sean Vogel is a captivating middle-grade adventure novel. Consisting of delightful characters and intriguing situations, it is a stimulating and suspenseful book ideal for engaging children ages nine years old on up. Not only is the story enjoyable, but it also has educational value. Some of the horrific events that occurred during World War II are presented in an impactful yet non-threatening manner, teaching history in an exciting and fascinating way. Brimming with suspense, it is an ingenious and thrilling story that will delight everyone who enjoys history steeped in intrigue and mystery.

Paris Secrets by Sean Vogel is an adventure novel appropriate for teens and young adults. Teenagers Jake and Ben won a slot in a cooking competition at the famous Le Cordon Bleu cooking school in Paris. Winning the competition would be a dream come true for Ben, but there’s more. Jake had a mission to do some digging into his ancestry in France. His grandmother, who had died in a fire, left behind a picture that he traced to France with his knowledge of architecture. As with his other adventures, Jake is about to unpack 80 years’ worth of history beginning with just one clue, which will lead him to discover things he never thought possible. The boys, together with their friends, will combine a fun cooking competition and a dangerous investigation.

Paris Secrets by Sean Vogel is another book in the Jake McGreevy series and is very interesting. It explored themes like bravery, grit, sacrifice, love, compromise, integrity, and resilience, among others. It was also very educative, shedding light on the 1940s Nazi occupation of France. I loved the blend of a casual cooking competition and the serious matter of war–-an effortless mix of fact and fiction. The plot was wholesome and unique and the character development was exceptional. I loved Jake and Ben’s relationship. Heather also left a good impression on me by pursuing her goals even before support came. Dahlia, among others, will always have my respect. Also, there’s a ton of educative information at the end of the book which I enjoyed! Sean has written something fantastic, and I loved it!

Paris Secrets whisks the reader along on Jake and Ben’s overseas adventure – a trip that combines participating in a televised baking competition, tracking down a photo’s origins, and solving a mystery that goes back decades. This is the third book in author Sean Vogel’s Jake McGreevy series, but the story stands well on its own. It’s a quick read, with 32 chapters packed into 160+ pages -- fast-paced action that will appeal to teens. And it’s a smart novel because it introduces readers to German-occupied Paris in the early ‘40s along the way. The Prologue sets the scene with an identification forger in 1942. At the end of the book, Vogel includes a fascinating array of references in a section called Separating Fact from Fiction.

When a book can serve as an adventure novel and a history lesson rolled into one, you know you’re getting value for your reading time. Paris Secrets is just such a find. With a rich cast of characters, a dazzling international setting, and a plotline that propels readers forward, Sean Vogel’s book is a delight that will have readers scurrying to find the first two books in the series. The relationship between Jake and best bud Ben is fun, but each new character added to their team brings a personality that makes the group one you don’t want to leave behind. This crackerjack duo manages to balance the stress of the baking contest and the escalating danger of their investigations – without losing their ability to come up with their trademark puns. The reader ends up entertained and educated.