The Memory of Sydney Skies of the Empire 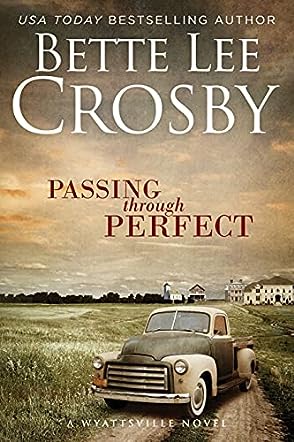 Award-winning novelist Bette Lee Crosby brings the wit and wisdom of her Southern Mama to works of fiction—the result is a delightful blend of humor, mystery and romance along with a cast of quirky charters who will steal your heart away.

“Storytelling is in my blood,” Crosby laughingly admits, “My mom was not a writer, but she was a captivating storyteller, so I find myself using bits and pieces of her voice in most everything I write.”

Crosby’s work was first recognized in 2006 when she received The National League of American Pen Women Award for a then unpublished manuscript. Since then, she has gone on to win another twenty literary awards, including the 2014 Royal Palm Literary Award, The Reviewer’s Choice Award, and the 2014 FPA President’s Book Award Gold Medal.

Passing through Perfect is the third book in her award-winning Wyattsville Series.

Passing through Perfect: The Wyattsville Series, Book 3 is a historical fiction novel written by Betty Lee Crosby. It's the story of Benjamin Church, a young African American who grew up and lived in Grinder's Corner, Alabama, in the 1940s and 1950s. He served in the Air Force during World War II and became an ace mechanic. When his tour was up, he went back home to Grinder's Corner. While he was serving, his mother died, but his father, Otis, was still alive and working the small farm that the family leased. Benjamin quickly realized the difficulties Otis was having keeping up, and he began to take over the hard work. Fearing that Benjamin was forgetting to enjoy his youth, Otis encouraged him to go to dances and meet young women. One of those young women, Delia, a parson's daughter, caught his eye and Benjamin knew right away that he would marry her.

I was entranced reading Betty Lee Crosby's historical novel, Passing through Perfect: The Wyattsville Series, Book 3. Crosby deftly brings to life a family and a culture, and the devastating impact that the separate and rarely equal ideology of the deep South had on African Americans in the 20th century. Benjamin is such an inspirational character. While the color of his skin kept him from achieving his dream of learning to fly in the Air Force, the mechanic skills he learned while serving are the building blocks that, together with his hard work and dedication, make his mark in society. He's not the only unforgettable character in Passing Through Perfect. Otis, known as Daddy Church to Delia, and the Klaussners are just a few of the bright stars shining in this historical fiction of what were very dark times for African Americans. Crosby's writing is fluid and careful never to slip into sentimentalism. Passing through Perfect is very nearly a perfect novel and, indeed, often exceeds that very exacting standard. It was the first book written by this author that I've read, and it will by no means be the last. Passing through Perfect: The Wyattsville Series, Book 3 is most highly recommended.

Passing Through Perfect by Bette Lee Crosby places readers in 1940s Alabama as Benjamin Church is returning to his childhood home after four years serving in the army. Grinder's Corner hasn't changed much, but Benjamin's mother is dead, the farm is near ruin, and his father is frail and has lost his zest for living. Benjamin, who left as a boy but is now a man, takes over farming and soon he and Delia, a girl from a neighboring town, are head-over-heels in love. Passing Through Perfect is full of consequences for paths chosen, with Delia's choice to become Benjamin's wife as one of the first paths that leads to both joy and heartache. Despite the bigotry and discrimination he repeatedly encounters as the years pass -- and the anguish it causes when tragedy strikes -- Benjamin perseveres and finds healing, hope, and friendship in most unexpected places.

Bette Lee Crosby has written a historically accurate fiction story that will tug at readers' heartstrings and cause tears of happiness, sadness, and even rage as they read Benjamin's story. It was truly painful to experience the hate, discrimination, and bigotry that existed (exists) in the south. People of color were dehumanized, but Benjamin never gave up, instead rising above it, always being true to himself, his family, and to God. The writing was outstanding and the characters were richly drawn, each with very real, unique personalities and traits, making them utterly lovable or completely loathsome. Passing Through Perfect forces readers to focus on what's truly important in life, and as Benjamin reminds us, “Perfect ain’t a place. It’s a time when everything’s good and we’re happy. Folks don’t live in perfect, they just get to pass through every so often.”

Passing Through Perfect is book three of the Wyattsville series, but it stands alone and I intend to read the first two in the series -- I am solidly a Bette Lee Crosby fan now. Though it's an adult novel, I also recommend it for young adults because the lessons are so important. Readers will encounter moderate, occasional profanity, some crudeness and violence, a few references to sex, and racial slurs, but everything works contextually.