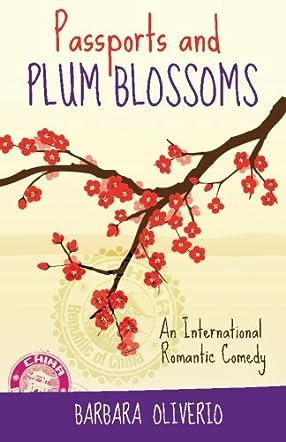 Readers' Favorite Award™ Winner Barbara Oliverio is first generation daughter of Italian immigrants. She grew up with a love of reading and a passion for learning.
Following a career path that included being a teacher, journalist, and marketer, she has lived as far away from home as Italy where she practiced her family's native tongue as well as took advantage of living near to other European countries to travel extensively. She lives with her husband Denver where dinner is usually a meal she cooks from one of her mother's treasured recipes. Other interests include New York Times crossword puzzles, good movies, and travel.

Barbara Oliverio’s Passports and Plum Blossoms is delightfully funny. Meet Annalise Fontana, known by her father as the “gypsy.” Surrounded by family and friends, Annalise sits as an outsider at a wedding. Wallowing in self-pity, she pronounces deep within her soul, the bride took her boyfriend, now she took her dream job; this woman, yes, this bride was living the life Annalise deserved. Not a very pretty picture. To remedy her depression, Annalise agrees to be her Aunt Lil’s traveling companion. Maybe all she needed was a change of scenery mixed in with a bit of adventure. Soon Aunt Lil and Annalise embark on a once in a lifetime journey to China. However, before they even leave Denver airport the adventure begins. Annalise literally runs into an out-of-this-world, handsome man in the gift shop. His smell is alluring, his eyes are mesmerizing, and his smile is captivating. This will not be the last time she encounters this gorgeous mystery man. With each new destination, sightseeing location and cultural site, he seems to be among the crowd. Is it fate, love or sheer accidental attraction? Regardless, “life was going to get interesting.”

Passports and Plum Blossoms is a sweet, romantic tale. Barbara Oliverio peppers her narrative with humor, honor, and family values. The tone is light-hearted and, as a reader, you soon sense you are a part of the heroine’s adventure. I really did appreciate the camaraderie between the generations; the openness and the lack of condescension between Aunt Lil and Annalise was refreshing. The respect and equality in the developing companionship is rare. Oliverio allows the younger character to impart to the older, and for the older character to inspire the younger; this aspect is not often seen in modern literature. Both characters are stretched, causing growth as the story unfolds, allowing the reader to expect the unexpected. This narrative portrays young love and mature love. It reveals the notion that romantic love has no timetable or preset location. It reminds us that love comes regardless of age and in ways we can never imagine. You are never too old to fall in love. Passports and Plum Blossoms is a feel-good story with an air of romantic adventure. It does not disappoint.

Barbara Oliverio’s Passports and Plum Blossoms is a delightfully light romantic comedy. Poor Annalise Fontana is feeling down after her ex gets married, she loses her job, and she moves back in with her parents. Best girlfriend Rory has plenty of suggestions, but Annalise decides to take off on a month’s trip to China with her beloved Aunt Lil. Both ladies have issues to overcome, and new life and relationships to discover, and the group tour turns out to have much more to offer them both than spectacular scenery. Annalise finds a special someone – and discovers the five virtues of plum blossom tea. But has luck changed for the better at last, or will it all end when she returns home?

I really enjoyed reading Passports and Plum Blossoms. Barbara Oliverio’s characters are endearing and very believable. I loved Annalise from the start with her sense of humor and self-deprecating nature. Her family, like all families, is a wonderfully mixed bunch of people, and their characters are nicely depicted. The plot is uncomplicated but with a few red herrings and mysterious moments that had me wondering in which direction things were going to go for the heroine, or her aunt too. The trip that Annalise takes with her aunt is the perfect setting and adventure for her personality and writing talents to emerge.

Oliverio writes with a lovely, clear, witty and heartening authorial tone which makes the book thoroughly enjoyable and entertaining. There are plenty of laugh out loud moments in this well-written book which eventually reaches an ending that should delight and satisfy fans of romantic comedies. Very readable and delightful. Recommended.

Passports and Plum Blossoms: An International Romantic Comedy is a romance novel by author Barbara Oliverio. The plot takes place in the run up to and during a holiday to China and Singapore, where senior citizen Auntie Lil wants to soak up the sights of the Orient. Annalise Fontana, her niece, is at a loose end when her life appears to have caved in, so she agrees to accompany Lil on her journey, looking after her but also indulging in some relaxing tourism, or so she thinks. So begins a rip roaring adventure of disastrous and hilarious proportions, where some of the greatest monuments in the world are the backdrop to Annalise and Lil’s new quest for romance, a quest neither of them really know they’re on until it’s too late.

My personal favourite features of the novel were the bit part characters that Annalise and Lil met along the journey (especially Georgiann), which reminded me of the strange collection of humans I’ve met in my own travels. Passports and Plum Blossoms had the resonance and humour of reality running right the way through it, from Annalise’s loveable best friend Rory, to the mysterious figure of Eli Chamberlain, who has great depth and character development for a leading man. Barbara Oliverio’s prose is highly readable, and the first person narrative lets us see the world through Annalise’s eyes, where we can relate to her feelings and see her develop as the novel goes on. Overall, I would highly recommend Passports and Plum Blossoms: An International Romantic Comedy to rom-com fans everywhere.