A Lonely, Little Lovebird Down Under
by Remi Nicole
Children - Animals
30 Pages
Reviewed on 08/25/2017 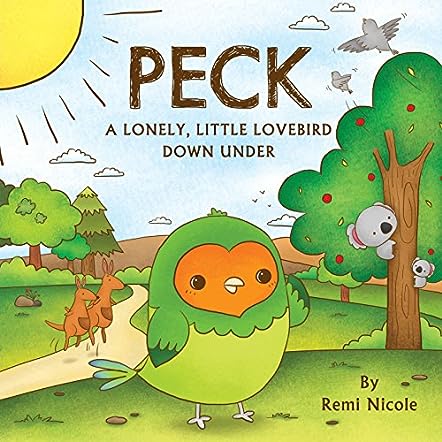 Peck: A Lonely, Little Lovebird Down Under is an animal picture book for children written by Remi Nicole and illustrated by Mabel Chong. Peck was the tiniest bird in the forest, but he definitely had the biggest heart. He loved to chirp and sing his songs, and the other animals and birds in the forest were happier when they heard him. But Peck was lonely. He looked around at all the other animals in the forest, and everyone seemed to have a companion or friend. He saw Harry and Haley Koala nuzzling up there in their tree. On the ground, Walter and Wendy Wallaby were holding hands as they jumped along, and Peck could see Charlie and Catie Cheetah spending time together. Where was Peck’s someone to love, he wondered? Peck decided that he would fly away from his nest and search out his new friend. At first, he met Seline Snake and he thought he’d nest by her, but she warned him away with a hiss. Peck was too little, and Seline would be tempted to have him for a snack. Peck quickly flew away, feeling sad and oh, so discouraged. Maybe, he thought, he had to leave the forest to find his love. And so, Peck began his great adventure in his quest for a love of his own.

Remi Nicole’s animal picture book for children, Peck: A Lonely, Little Lovebird Down Under, features a most enchanting little lovebird who leaves the comforts of home and nest in order to find his own true love. As I read this endearing book, I couldn’t stop smiling. Peck is adorable, even if he is capable of making the saddest faces when he’s unhappy. Nicole’s story is marvelous and Mabel Chong’s illustrations work so very well to make Peck and his quest real. Each panel is brightly colored and features the determined little bird at every step of his adventure. I particularly enjoyed how the author and illustrator worked to introduce Australia’s animals as well as showing the forests, deserts and cities a visitor would find there. Peck’s story is perfect for story hour, but it’s also a great primer for new readers. The vocabulary is not too challenging, and the pictures will help readers keep up with the story. Peck: A Lonely, Little Lovebird Down Under is most highly recommended.