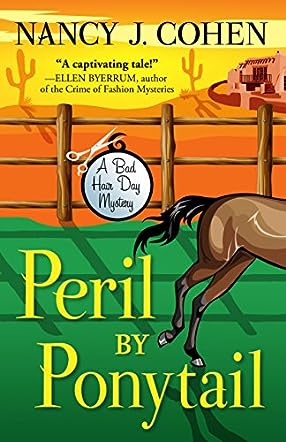 Nancy J. Cohen writes the humorous Bad Hair Day Mysteries featuring hairdresser Marla Vail, who solves crimes with wit and style under the sultry Florida sun. Titles in this series have made the IMBA bestseller list and have been selected by Suspense Magazine as best cozy mystery. Nancy has also written the instructional guide, Writing the Cozy Mystery, an easy reference on how to write a winning whodunit. Her imaginative romances, including the Drift Lords series, have proven popular with fans as well. A featured speaker at libraries, conferences, and community events, Nancy is listed in Contemporary Authors, Poets & Writers, and Who's Who in U.S. Writers, Editors, & Poets. When not busy writing, she enjoys fine dining, cruising, Disney World, and outlet shopping.

Peril By Ponytail (Bad Hair Day Mysteries) by Nancy J Cohen is a murder mystery. Marla and Dalton have gone on their honeymoon, but not to the sun kissed beach that Marla was hoping for. Instead, they are on a dude ranch in Arizona, owned by Dalton’s family. Instead of a peaceful break, the pair finds themselves embroiled in a race against time to find a murderer. Dalton’s uncle is in the frame and Marla decides to trust him and attempts to find the real murderer. Secrets are fast being revealed and Marla and Dalton find themselves being targeted in a bid to keep them quiet. What is the connection between the water bottling plant, the ghost town and the old copper mines, and where does the dude ranch fit in?

Peril by Ponytail (Bad Hair Day Mysteries) by Nancy J Cohen is a captivating story, the kind that draws the reader in and deftly involves them in a complex mystery. You might think that you have guessed who the baddie is, but the way this story has been written throws you off, takes a lot of different twists and turns, and the suspicion falls on so many people. I found it to be an incredibly well crafted story with a neat plot and good characters. I understand that this is number twelve in the series and, not having read the rest, I thought I might be at a disadvantage. However, Nancy has written this with enough character development that a reader will know them inside out without needing to read the rest first. Nice story, I look forward to a continuation.