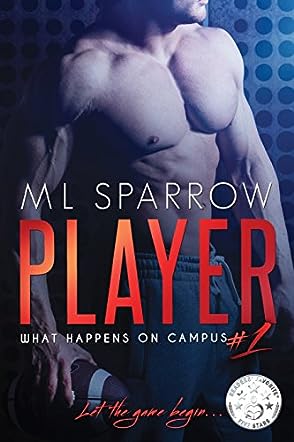 M L Sparrow is currently the author of four books: two YA Sci-fi’s, The Demon Inside and Ghetto, an Adult Fantasy called No Rest for the Wicked and she will be making her debut into the Contemporary Romance world with her NA story, Player. She will write pretty much anything that pops into her head, no matter the genre, and enjoys keeping her readers guessing as to what she will write next, though you can pretty much guarantee that there will be some degree of romance!

As well as writing, M L Sparrow enjoys travelling and has been to some amazing countries in the past few years, her favourite of which was Japan. She never fails to gather inspiration from her travels and has an endless supply of ideas for future novels…

Player: What Happens on Campus, Book 1 is a contemporary romance novel written by M.L. Sparrow. After the accident that claimed the life of her brother, Jack, Chloe had indefinitely put off her plans for college and had taken on all the overtime and holiday work she could manage until her parents finally stepped in. They knew her brother would want her to move on with her life, and her grades were good enough to get the scholarship that would enable her to study abroad. That day had finally come. She would be starting as a freshman at St. Joseph's University two years older than most of her classmates, but still Chloe hesitated about leaving her parents until her dad helped her with her final packing. When she finally arrived in South Texas, she was struck by how hot it actually was, and what a nice change it made from the chilly English weather she was accustomed to. She made friends quickly once on campus, starting with her roommate, Riley, an irrepressible party girl and compulsive shopper. But Parker was the person who really stood out for Chloe. He had helped her carry her luggage up the stairs to her dorm room that first day, and even though he had a well-deserved reputation as a player, something about his smooth Alabama drawl and the way he looked at her had her hooked.

M.L. Sparrow's contemporary chick lit novel, Player: What Happens on Campus, Book 1, is an entertaining and sweet story about two injured souls who find each other against all odds. I went from wondering how a young British woman would pick a school in South Texas to study in, to enjoying her reactions to the very different culture she was experiencing almost immediately. Watching as she slowly and carefully progresses from onlooker to participant in school was a treat. Sparrow's story is engaging, and her characters are authentic and believable. Player: What Happens on Campus, Book 1 is highly recommended.

Player (What Happens on Campus Book 1) by ML Sparrow is a romance novel between two college-going students who come from different backgrounds and mindsets. Chloe is a young woman just entering her twenties, who has traveled from England to Texas on a scholarship to go to college there. She starts off her freshman year somewhat later than most students because of a tragic car accident in her past that has left her grief stricken and tormented with guilt. Parker, on the other hand, is a carefree young man whose sole ambition is to play professional football and who is also known as a “player” who doesn’t want to seriously date or settle down anytime soon. As these two unlikely people meet, the plot develops around their mutual attraction and their individual struggles as they come to terms with the reality that they may be falling in love.

Player (What Happens on Campus Book 1) by ML Sparrow is an enjoyable read and I liked reading about day to day college life as well as about Chloe and Parker’s developing relationship. I found the characters to be quite believable and relatable, and their romance is depicted well as it is shown to progress in a natural manner. I especially liked how Parker wants to date someone almost against his will, which was a true testament to how strong his feelings were. Chloe is also shown to be a sensible, level-headed girl coping with some trauma from her past. Overall, this is a well-written book and people of any age who enjoy romance novels will surely enjoy reading this one.

Player was such an enjoyable read! I enjoyed it from the beginning till the very end.

Chloe believes she isn’t entitled to any fun after an incident turns her life upside down. With the push from her parents, she finally decides to pursue college where she meets the ultimate player of St. Joseph’s University. Parker doesn’t do relationships but something about Chloe makes him want to want more. What happens when these two people with opposite ends begin to fall for each other?

The plot was thoroughly enjoyable! This was a typical NA read but I loved how it was all executed. Chloe isn’t an introvert but she isn’t an outgoing person as well. She still has nightmares about the incident which happened with her. I absolutely loved how she slowly came out of her shell and learned to forgive herself. I liked the chemistry between Chloe and Parker. Their relationship slowly developed but I would have loved some more angst between them but nonetheless, I enjoyed it.

Parker is a great character. I loved how he treated Chloe and the fact that they both made each other a better person. In fact, all the other characters were pretty great as well and I loved every one of them and I also loved how flawed they were. I enjoyed reading about the drama surrounding their lives. I am very excited to read the next book in the series which is about Riley, Chloe’s best friend, and roommate and Cameron. But more than that I am intrigued to read Dawson and Payton’s story, I sooo hope we get their story soon!

Overall, Player was a fun and light-hearted read! I enjoyed the plot and the characters were pretty awesome. The writing was smooth and easy to read and the pace was even throughout the book. I can’t wait to read the next book in this series!

What happens when a smart English miss and a charming football player hook up?

Chloe moves from England to Texas after accepting a scholarship to attend college. Meeting star quarterback Parker Mitchell her first day on campus is by pure chance, however, when he's constantly seeking her out...could this be fate?

Chloe Newman is definitely not a blushing English rose. Straightforward, intelligent, and a bit sassy, Chloe knows what she wants in a relationship and isn't afraid to admit it. She wants someone who's vested in a relationship with her alone, the last thing she wants or needs is a player. As a twenty year old freshman, Chloe's let life pass her by the last couple of years, it's time for her to grab the reigns and decide what life has in store for her. Parker Mitchell is one surprise she wasn't expecting.

Parker Mitchell is a laid back, good ole-boy with manners from Alabama attending college on an athletic scholarship. Going into his third year he's got one goal, to find a way to get into the NFL. He admits he's a player; why have a serious relationship with all the variety? Besides, he's seen dysfunctional thanks to his family, he's perfectly fine playing the field as long as everyone involved knows the score. And then he meets Chloe.

I am quite impressed with Sparrow's venture into a new genre! Although it's a different setting from her fantasy books, her charm and wit still carry across the board. For me, the story did start out a little slow but once I found my rhythm I was engrossed until the end. I enjoyed the focus Sparrow gave Chloe and Parker as friends and as a couple. There are small dramas they face, separately and as a couple, but it's not excessive drivel, it's normal relationship issues. How the couple handles the issues is what made this book worthwhile. To be precise, Chloe and Parker actually communicate with each other (thank you Ms. Sparrow!). I rather enjoyed that option over them acting like immature hooligans.

One sexy player who meets his match with a smart Brit, college parties (drinking and drug use is mentioned), a steamy romance, and a great secondary cast of supporting characters made this a fun read. Groundwork for a supporting character is also laid out for the next book in the Campus series; it will be interesting to see what happens next for this group!

Emotional blast. How can you get away from something so traumatic that it changes your life and the way you view it? Runaway to another country. That was the idea for Chloe, but not the answer to the problem. Campus heartthrob and quarterback captures her attention and then some on their first encounter. Dare I say a player with a hidden gentleman inside.

With each new encounter and interaction the relationship began to expand and become more. Parker received something more from Chloe than every before. Or could that be by choice. There was just something about Chloe. That something about Chloe brought out the haters. Campus life meant everyone was in your business including the ex/exs. Then being with family can be a good thing or bad depending on your circumstances. Lets just say that it was not all roses for the two.

I found Chloe engaging. A bit neurotic but that was to be expected with her trauma. Parker was not that dirty dogg college boy player that was displayed for the world. But he was in a way. He was complex in his own way.