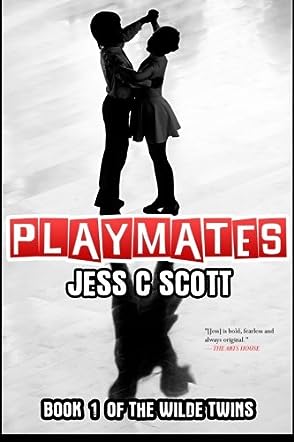 Jess is an author / artist / non-conformist who loves original stories and seeking the truth.

She is the founder of jessINK, a publishing company dedicated towards creating meaningful entertainment.

Jess was a participating author in the 2012 Singapore Writers Festival, and has been called "bold, daring, and always original" by The Arts House.

Psychological thrillers are where she explores the dark side of human nature.

"I find psychopaths intriguing and disturbing," she says. "I doubt the nature versus nurture debate will go away any time soon."

The book, Playmates: Book 1, Wilde Twins by Jess C. Scott, is the story of Tania and Trevor who grow up in a dysfunctional family. The twins develop a closeness that becomes deeper and deeper as their family life sinks into disarray and madness. In school, the twins manifest abnormal behavior and the games they play at home become increasingly gruesome. With Trevor taking the role of Tania’s protector, the twins fantasize about running away, killing, and taking charge of their own lives, no matter what happens. And when their mother dies under unusual circumstances, the abuse on Tania continues. This time, it is their father who is the perpetrator. The deadly games that Tania and Trevor play will finally reach a stage where there is no chance for both of them to turn back from the path of depravity.

Playmates is the first installment in a series of psychological thrillers called The Wilde Twins. Written by Jess C. Scott, it introduces readers to twins Tania and Trevor Wilde and their plunge into a life of murderous chaos. The story is told from the perspective of the twins from the age of nine until they reach thirteen. In this way, one gets a close look at how the two children think and react to the domestic turmoil that characterizes their family life. This is perhaps what makes the story gripping because it allows the reader to become intimate with the story’s main protagonists as they grow up. Can anyone really blame them when they turn out the way they do? I find myself facing this rhetorical question as I continue turning the pages of the book. Indeed, this is a story that reveals the dark and ugly side of human nature.