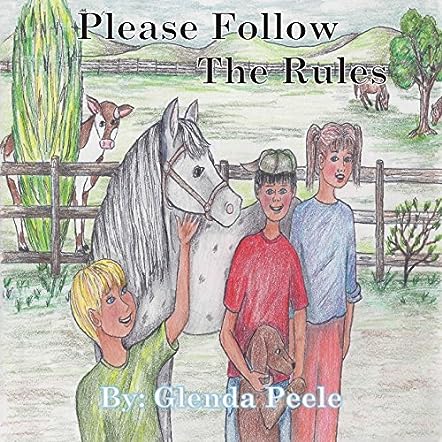 Glenda is a dance studio owner who has been teaching dance for over 45 years all across the world. Her love of her students inspired her to write a series of children's books to teach them about important life lessons. Her first book Please Follow The Rules is about a little boy who doesn't follow the rules and the chaos it causes

Please Follow the Rules (Mrs Glenda's Book Nook) by Glenda Peele is a charming and educational story of a family that lives on a farm and what happens when one of the children disobeys his mom and mayhem ensues. Mr. and Mrs. Brown have three children: Rosey (12), Clem (10) and Clive who is four. Rosey prefers to stay in her room and do some colouring, while Mr. Brown is busy with farm work, and Mrs. Brown attends to the household accounts. The boys run off to play hide and seek, with their mother’s admonition about not playing near the pond ringing in their ears. However, as with most kids, their mother’s warning goes in one ear and out the other, and Clem runs off to hide, while Clive counts to 100. However, in his new hiding place (because Clive knows all the old ones), Clem falls asleep and is unaware of the chaos that erupts when he is thought to be missing. The whole town and the police force turn out and comb the fields, the woods, and the surrounding countryside, even checking if Clem had perhaps fallen down a well. Happily, Clem is found, but where had he been hiding?

The author was a teacher for a good many years and the story itself has a fable or moralistic quality to it that children will appreciate. Everyone knows the rules: parents should be obeyed, and most times those rules are in place to protect kids. Living on a farm, or in fact anywhere, means that an accident or disaster can happen in seconds and while kids may think they can take care of themselves, many times they can’t. I did think Clem’s punishment was a bit harsh, but being grounded is better than ending up in the hospital. The moral of the story is very clear and kids will appreciate it because most kids have been given rules and broken them. The important take away from this tale is that Clem’s parents made the rules for their kids’ safety, and because they love their kids very much. Clem made a mistake, but his family still loves him and hopefully he has learned from the experience. Perhaps being grounded will give Clem time to reflect on obeying the rules next time.

The illustrations are detailed line drawings with coloured pencils. I liked this presentation because it gives the impression that children have coloured in the pictures themselves. The story also gives food for thought that can be used in discussion with a teacher, or even between parent and child, perhaps asking the child if they thought Clem’s punishment was too severe? I liked the fact that the community followed sensible steps once Clem was missing, such as getting together as a group to look for him, and calling the police. This could also give adults something to discuss with kids, such as what they would do if a family member or friend went missing. There is a lilting, rhythmic quality to the narrative created by the rhyming of many words. All in all, a sweet little story with thought provoking themes.