Poet Emperor of the last of the Moghuls 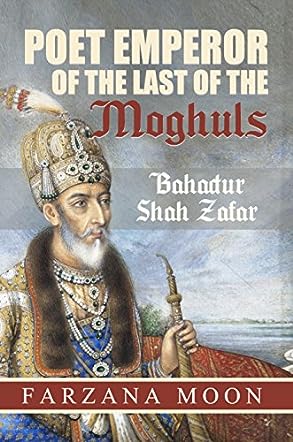 Farzana Moon is a historian and a playwright. Five of her scholarly books on Moghul History are published and sixth one is being considered for publication by Cambridge Scholars Publishing. All six of her Moghul sequels are to be adapted for documentaries. She is well versed in Islamic literature. Her first published book on Islam is, Prophet Muhammad The First Sufi of Islam. Another book to be published by CSP is No Islam But Islam to be released in December. Currently she is writing a book on Sharia.

Poet Emperor, The Last of the Moghuls: Bahadur Shah Zafar, by Farzana Moon, is a compelling story of the final days of the last Moghul ruler of India. Founded by a Central Asian ruler who was descended from the Genghis Khan on his mother's side, the Moghul dynasty ruled India and neighboring territories for over three hundred years. When Bahadur Shah Zafar ascended the throne, the dynasty had already lost most of its power and prestige and he was a virtual prisoner in his palace in Delhi. He married the beautiful Zeenat Begum who would accompany him and what was left of his family to exile in Burma. In the end, his greatest legacy is the poetry that flourished during his reign which is still recited in most parts of India and Pakistan until today.

Poignant and melancholic, Poet Emperor, The Last of the Moghuls, is a book that recreates the life of Bahadur Shah Zafar, nominal ruler of India, during the declining years of the Moghul dynasty. Surviving on a pension from the British East India Company, he was accused of leading a rebellion in 1857–58, and was finally deposed by the British government. Author Farzana Moon captures the heart and soul of a poet emperor whose life is full of tragedy and sorrow. Descriptive and lyrical, the author’s writing style enhances the narrative, and it brings to life a tragic but inspiring tale. This well researched novel is a good glimpse of the final years of the last Moghul ruler of India. Poetry, along with his love for his family and especially his young wife Zeenat, are the main sources of happiness for Bahadur Shah Zafar and because of this he was able to leave a lasting legacy despite the turmoil his country was embroiled in during his life and times. Highly recommended!