A Passport to God Portrait of a Conspiracy 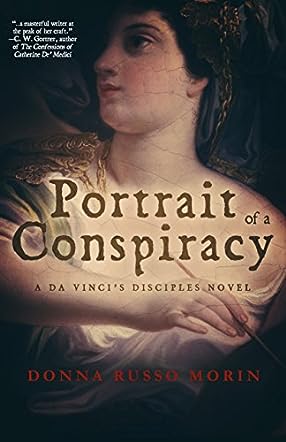 In addition to writing, teaching writing, and reviewing for literary journals, Donna works as a model and actor; highlights of her work include two seasons on Showtime’s Brotherhood and an appearance in Martin Scorsese’s The Departed.

Donna’s upcoming series, Da Vinci’s Disciples, is the story of a secret society of women artists, under the tutelage of the great Leonardo da Vinci, who must navigate the treacherous life of 15th century Florence while trying to bring their artistry to the world. The first book in the series, PORTRAIT OF A CONSPIRACY, releases in May 2016.
With her partner, Carl, Donna lives by the beautiful oceans of Rhode Island. She is the mother of two son, Devon and Dylan, an opera singer and a chef, still her greatest works in progress.

Strength and talent are not limited to men, although that was how it was seen in 15th century Florence under the rule of the powerful Medici family and the Church. When Viviana is faced with the murder of Guiliano de Medici by the hands of the Pazzi family in the Cathedral on Ascension Day, she begins a quest that involves her Sisterhood – a group of women who secretly indulge their artistic abilities in a locked room of a small church in Portrait of a Conspiracy: Da Vinci's Disciples Book One by Donna Russo Morin. With the help of none other than a young Leonardo da Vinci, Viviana and her associates combine their artistic talents to duplicate a painting thought to have been stolen by one of their friends who has been missing since the day of the horrendous assassination. Political intrigue, revenge and the thirst for power nearly bring Florence to its knees as it seems no one is safe from the power of Lorenzo de Medici. Will Viviana and her friends find the missing member of the Sisterhood or will their efforts only cause them more heartache and trouble?

With breathtaking descriptions and tremendous emotion, Donna Russo Morin spreads the glory of Renaissance Florence before the reader with all its glamour, intrigue, ruthlessness and artistic wonder in Portrait of a Conspiracy: Da Vinci's Disciples Book One. Although based on historical fact, these fictional characters come alive, drawing you into their world of societal rules, political posturing and supreme power where no one is safe. From the unique point of view of a Sisterhood of women artists, this historical look at Florence and Leonardo da Vinci is engaging and quite fulfilling, bringing the past to life in all its horror and beauty. A fantastic read! Donna Russo Morin's writing is quite engaging and the story, though based on fact, is unique and extremely interesting. I look forward to the next volume.

So very grateful for this wonderful review. Made my day. Thank you so very much!

So very grateful for this wonderful review. Made my day. Thank you so very much!