26 stories about how being Childfree impacts your life, wealth, and finances.
by Jay Zigmont, Ph.D.
Non-Fiction - Business/Finance
237 Pages
Reviewed on 05/12/2022 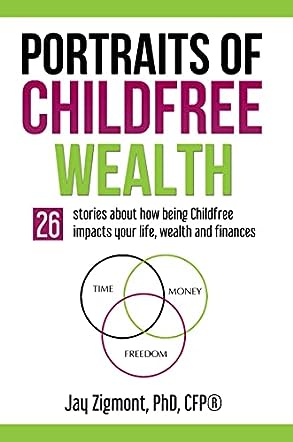 About the Author, Jay Zigmont, Ph.D., CFP® Dr. Jay, and his wife are Childfree and live in Water Valley, MS. He has a Ph.D. in Adult Learning from the University of Connecticut and is a CERTIFIED FINANCIAL PLANNER™ and Childfree Wealth Specialist. He is the founder of Live, Learn, Plan, and Childfree Wealth, a life and financial planning firm specializing in helping Childfree Individuals. He has been featured in Fortune, Forbes, Wall Street Journal, CNBC, Business Insider, Woman's World, Investors Business Daily, and many other publications. Visit Childfree Wealth at https://childfreewealth.com.

Portraits of Childfree Wealth by Jay Zigmont, Ph.D. is a compilation of non-fiction slice of life stories that revolve around those who do not have any children, by circumstance, choice, or design, and provides “26 stories about how being Childfree impacts your life, wealth, and finances.” Zigmont homes in on the diversity of those he has interviewed with an even finer focus on the finances and lifestyles of the people sharing their Childfree stories. These range from Autumn, a married 28-year old whose choice not to have children has some basis in the family dynamic she grew up in and a conscious decision to live life on her own terms, follow her dreams, and harness the creativity she was discouraged from cultivating in her youth; to Jacy, a single and Childfree woman whose medical issues and desire not to carry the responsibility became the primary drivers in not having children, although she is in a relationship with a man who has a child—one he did not tell her about until she was already in love. Then there are Ryan and Anna, who initially agreed not to have children, but when Anna changed her mind later in their marriage, infertility ultimately determined the course of their lives.

The financial “freedom” that most interviewees in Portraits of Childfree Wealth stems from not having to consider things like the huge expenses that arise from raising children, the ability to downsize housing, and simply picking up and moving where jobs and opportunities exist. There is also, as Jacy points out, the freedom from responsibility. Among the most popular social media hashtags right now is that self-care isn't selfish, yet for some reason, this goes right out the window when we meet people who do not have children and do not plan to. Quite the opposite, as they are pigeonholed into one of two categories: they are either selfish, or they are infertile. The most interesting vignette and the one that most rebutted the 'selfish' misconception in Jay Zigmont's collection is that of Rebekah and Mathew, who state outright that they are aware of human suffering and do not want to add to an already bloated world population. I actually have a brother and sister-in-law who made the childfree choice for exactly this reason. This is an excellent book that I went into for the 'money' side as it piqued my curiosity, but I walked away with something even better: the human element many of these individuals and couples are so often denied, and the wealth that comes from personal choices that increase the quality of life. Very highly recommended.