How I Saved a Planet! 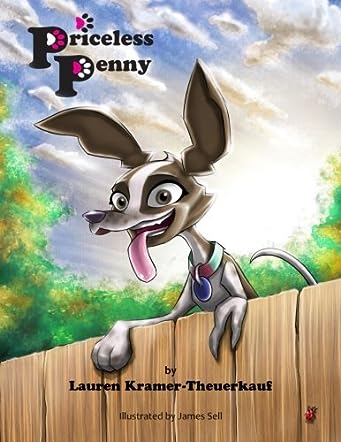 Priceless Penny (Volume 1) is a children’s book written by Lauren Kramer-Theuerkauf and illustrated by James Sell. Penny smiles as the sun gently rises. Adoption day has arrived at the shelter and she wonders which dog-lover will adopt her. When the doors open, Penny proudly sits at the front of her cage, waiting to be chosen. As each person looks at her quizzically, asking for a closer look, Penny gets excited, thinking that it is time for her to go with a new family. Instead, people screw their noses up when they look at her, commenting on her oddly shaped front leg and tease her about her giant ears and nose. The end of the day leaves Penny looking around at the empty cages. The insults from the cruel humans had made her heart sink. Her self-image is shattered. Depressed and despondent, Penny is surprised when she is put in a carrier and driven to the home of a foster carer, in order for the shelter to make room for the next lot of dogs, but becomes frightened when she is driven away again. Little does she know that she is finally on her way to her new home, where she will never again be sad or alone.

My heart melted while reading Priceless Penny (Volume 1). It covers so many things, both in the human and animal world. Lauren Kramer-Theuerkauf has done a wonderful job in confronting serious social issues such as judging a book by its cover (in this case, judging Penny by the fact that she has a deformed paw), people only wanting to adopt something which pleases the eye, bullying and degrading others, regardless of their species. Penny was a confident dog at the beginning of the tale, feeling sure that she would be eagerly adopted by somebody in the large crowd that entered the shelter on adoption day, but was instead confronted by hateful, cruel people who wanted a trophy animal more than a new family member. Children will delight in reading this book countless times, as the joyful ending is one that makes the heart swell, turns young frowns upside-down, and shows children that dogs have feelings, just like they do. I recommend Priceless Penny (Volume 1) to readers aged 5-12 years of age, and believe this book would be ideally stocked in kindergartens, day-care centers, home libraries and animal shelters.