Primrose and The Wolf 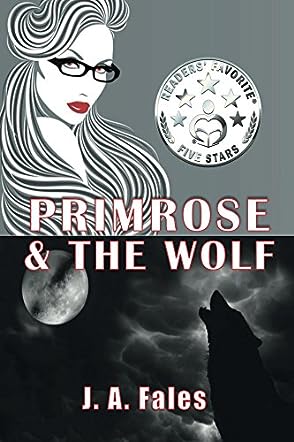 Primrose & The Wolf: A Huxley Sisters Paranormal Romance is a paranormal shifter fantasy written by J.A. Fales. Primrose Huxley had finally gotten somewhat comfortable in her little bookstore, Volumes and Vagaries, and was beginning to feel in control when she heard a voice that brought her back to reality with a sharp thud. She never wanted to see the handsome and sexy wolf shifter again, especially after his betrayal and theft of her grandmother's locket. Primrose had suffered terribly after that, first in a prison as a disgraced nun facing execution, and then under the tender and excruciating mercies of the sadistic and psychopathic leonine prince of hell, Ipos. She still bore the scars of their time together on her body and in her soul. Primrose knew it was imperative that she remain hidden safely in the fairy town called Paradox that had been her refuge. Mason Geroux's reappearance was therefore not at all welcome, and he had no idea just how powerful and deadly his beloved witch had become.

J.A. Fales' shifter fantasy novel, Primrose & The Wolf: A Huxley Sisters Paranormal Romance, is set just beyond the real world, in a little faerie town called Paradox. Its inhabitants will sound vaguely familiar to those readers who grew up on stories by the Brothers Grimm and Han Christian Andersen, and later found their imaginations taking flight with stories from Greek and Roman mythology. Fales adroitly blends all these influences into a compelling and wryly humorous tale about a cursed family of immortal witches and their epic struggles against a prince of hell and an elder god. Add in some references to spaghetti Westerns and David Carradine's unforgettable performance in the 1970 series, Kung Fu, and you end up with a thought-provoking, original, and infinitely enjoyable tale that succeeds on so many levels, not least of which is shifter romance, complete with a very sexy alpha wolf.

While this is a squeaky clean romance, suitable for young adult as well as adult readers, there's plenty of raucous attitudes, danger, and unrequited passion guaranteed to keep readers on edge and waiting to see what happens next. Fales' story is deftly plotted and reads like a dream, and her characters are funny, exasperating, and altogether unforgettable. I'll be looking for more Huxley Sisters stories in the future. Primrose & The Wolf: A Huxley Sisters Paranormal Romance is most highly recommended.

There was no greater curse in life than the curse that followed the Huxley bloodline and Primrose Huxley, one of the five witch sisters, got the worst of it with a second curse to boot. Belonging to an immortal lineage, the sisters had lived for centuries, but their bodies did not look a day past their twenties. Life had, however, not been fun and after escaping from the torturous hands of a demon, Primrose now lived in hiding with only her sisters having knowledge of her location. Her safe haven was invaded when a wolf-shifting old flame showed up unannounced. Several centuries had passed since Primrose had been with Mason, and she had since then tried to live with the shame of his betrayal and painful consequences. The moment he showed up, however, all the feelings, the memories, and the pain came flooding back. There was a more urgent problem; if Mason had managed to find her, it would not be long before her mortal enemy came calling. The sisters and Mason prepare to save Primrose from once again falling into the hands of the most powerful and most ruthless of demons, but with their cunning grandmother seemingly on the enemy's side, who knows what will happen.

Primrose & The Wolf (A Huxley Sisters Paranormal Romance) by J.A. Fales is a one-of-a-kind fantasy romance. Every once in a while you read a book with a story so compelling it is bound to stay with you for a very long time, and this is one such story. Primrose & The Wolf is the type of novel you read nonstop because you cannot wait to see how it all plays out, but then you are sad to see it end. It is an intricate mix of the ancient and the current; a perfect blend of the contemporary world with the enchanted world of immortal witches, and J.A. Fales pulled it off flawlessly. Just imagine a world where immortal witches argue about Adele's music and worry about body image, wolves take drugs, and demons discuss pop culture, while at the same using their powers to fight the most formidable of battles. J.A. Fales put together the most bizarre cast of characters from the most unbelievable species, but it is this very clash that brought the story to life with each character adding its unique persona. So much happened in this part of the story and yet there is so much still to come; a perfect start to what is definitely going to be an epic series.

What a fun, fun read I just finished! Primrose & The Wolf: A Huxley Sisters Paranormal Romance, the newest release by author J.A. Fales, is a great example of a paranormal romance at its finest, and I'm so excited that I got the chance to read it. Follow the story of twice-cursed witch Primrose Huxley, the oldest of five sisters who are all doomed to have bad luck in love. Prim's kept herself quietly in hiding, running a book store, trying to keep her family safe from a darker power lurking inside her. But when wolf-shifter Mason Geroux finds her and demands that she helps to find his missing wife and the enchanted locket in her keeping, Prim's carefully laid plans are quickly tossed aside. And when the chemistry between the witch and the wolf/man starts to heat up, when Prim's sisters decide it's time for a sisterly visit, and when a demon decides he'd like Prim's power for his own, and when pretty much all erupts at the same time, well, you'll have to read the book to see what happens!

I loved Primrose & The Wolf. Loved. It. How's that for a review? Well, it's absolutely how I felt about this fun, adventurous, and, yes, steamy story. Author J.A. Fales has done an exceptional job in creating a book that her readers will find so difficult to put down that they will likely read it in one sitting, just like I did. The author's ability to create characters that her readers will be able to relate to, connect with and come to care for, even in a paranormal setting, is simply second-to-none. The story line moves quickly, and will have readers breathless in one moment and laughing in the next. I very highly recommend Primrose & The Wolf: A Huxley Sisters Paranormal Romance, and I look forward to reading more from the very talented J.A. Fales as soon as I possibly can!