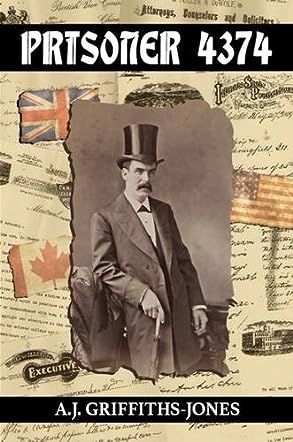 A.J. Griffiths-Jones was born in Shropshire, U.K. She spent ten years living in London where she found a passion for researching Victorian crime.
A.J. has travelled extensively and spent ten years working in China as Language Training Manager for a bank.
She is currently working on a series of novels and researching a second 'Jack the Ripper' related book.
In her spare time the author enjoys growing her own produce, swimming, reading & travelling.

Prisoner 4374 by AJ Griffiths-Jones is a true story based on historical fact. The identity of Jack the Ripper has long been wondered at, and many names have found their way into the frame. For more than 100 years, Dr Thomas Neill Cream was in the frame. Far from being a blameless character, an innocent, he did spend his time preying on prostitutes in Victorian London, leading them to a horrible early death. Because of this, he earned the moniker “The Lambeth Poisoner” and he served time for his crimes. While Jack the Ripper stalked the street of London, carrying out his dreadful deeds, Cream was actually in prison in Illinois, and it is this fact, amongst others, that has caused much debate about him being in the frame. Was he there in person or did he get out somehow, perhaps through bribery? Maybe he used a doppelganger to take his place in the prison while he managed to get across the seas to England. This book tells his story, from his own point of view.

Prisoner 4374 by AJ Griffiths-Jones is a stunning piece of work. The story of Jack the Ripper is one that fascinates many, including me, and I am always interested in new stories that come out of potential suspects. I have to admit that Cream was not a name I had come across until now and the book made for a good read. It is awfully difficult to write a true story as if you are the first person. Ms Griffiths-Jones has done an admirable job of becoming Dr Cream, of leading us through his life right up to when he stood on the gallows. This is compelling reading and it is written in an engaging manner so that you can’t help but be pulled into the story. The research that has gone into this must have been terrific and Ms Griffiths-Jones is to be highly commended on pulling it off. You really do feel as though you are listening to Dr Cream telling his own story. I would highly recommend this book to anyone who has an interest in the Ripper and in criminology. Stunning work.