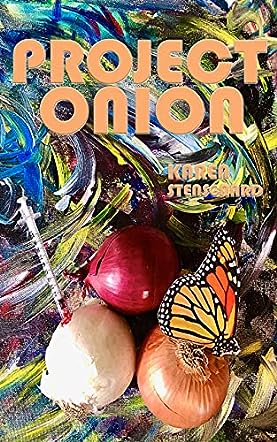 Karen Stensgaard is a member of the Authors Guild and has published two novels, AQUAVIT and BLUENESS. Her latest, PROJECT ONION, taps into her former career as an internal auditor and consultant in New York City. She’s based in Philadelphia with her husband and two rescue cats. Stay in touch on social media and via karenstensgaard.com.

Project Onion by Karen Stensgaard is book one in The Melville Consulting Series. Kat Jenson has a new job as an audit consultant at an investigation company called Melville Consultancy. Assigned to Project Onion, Kat’s job is to investigate the bank accounts of a drug lord known as El Rey and when she uncovers a money laundering scheme, things turn dangerous for her. His bank accounts are frozen, prompting him to pay a visit to the consulting company and threaten the boss. The police arrest El Rey but Kat is scared and wants out. But, because she took a year out of employment to go off on a trip, jobs are hard to come by. With no money, she is tempted to keep going but when she comes face to face with El Rey, her life is in danger once more. El Rey wants revenge and he will stop at nothing to get it. Will Kat succeed in bringing him down for good or is her life in peril?

Project Onion by Karen Stensgaard is an engrossing read, packed with suspense, a little romance, and even some time travel for good measure. It has a very strong female lead, plenty of action, and no small amount of stunning twists and turns that will leave you dizzy. The characters are real people, entirely believable and relatable, and that includes the antagonists. The dialogue is snappy and descriptive, drawing you in from the start, and the pacing is just right – not so slow that you lose interest and not so fast that you can’t keep up. The main character is the kind of woman that others might dream of being – a sophisticated, smart decision-maker who isn’t afraid to stare danger in the face and the thrilling plot marks the start of what looks to be a great new series. I thoroughly enjoyed reading this and am looking forward to more of Kat Jenson’s adventures.

When Kat accepts a job offer from Jackson Chow at Melville Consulting, she expected nothing more exciting than her experience as a financial auditor. But she needed the job as well as the income. Following an extended cruise from Copenhagen to Hong Kong, followed by a trip to Texas and the West Coast, it was time to return to reality and a more mundane life. Project Onion is her first assignment and is anything but mundane. Between trying to escape the increasing demands of her boyfriend Charlie and realizing the dangerous nature of her new job, Kat doesn’t have much time to mourn her ex-husband’s death or establish a new routine. Alone in her apartment with a stone gargoyle for conversation, Kat’s life takes a chilling turn. As the target of drug kingpin El Rey, Kat realizes she will never be truly safe again.

Project Onion is the first entry in The Melville Consulting Series by Karen Stensgaard, a compelling narrative with an intense conflict and a sophisticated female protagonist. Kathryn "Kat" Jense lands a new consulting job. Her investigation into a drug lord’s account reveals money laundering and other dubious activities that lead El Rey’s accounts to be frozen. El Rey is not a man to cross, and he threatens Kat’s boss. Although El Rey gets arrested, Kat doesn’t feel safe anymore. When she musters up the courage to continue in the consulting business, it leads her to face the man bent on revenge. Will Kat flee for her life or stand up and fight?

An incredible story from a great storyteller with realistic and elaborately developed characters, Project Onion is a spellbinding opening that will create a lot of anticipation in readers as they wait for the next installment in the series. The novel has strong plot points, and getting involved with a vindictive and vicious drug trafficker is a compelling premise. Kat has a terrible experience with drug addiction, and thoughts of her brother’s demise are still fresh in her mind. Apart from Kat and El Rey, there are interesting characters that readers will want to follow, including Charlie and Heather. The narrative is enriched by the beautiful prose and Karen Stensgaard’s deft creation in setting and atmosphere. The writing features detailed descriptions, and I enjoyed how some of these details fit into the daily experience of the characters, driving realism and humanity in the story. Overall, Project Onion was an enjoyable reading experience.

Project Onion: Book 1 in The Melville Consulting Series by Karen Stensgaard is bound to give you a warm feeling for its heroine Kathryn Jensen. She may appear to be your stereotypical fickle-minded chick, but she is a fighter, one who is willing to try again and will not put up with any nonsense, even when it means going up against a big-time drug kingpin. She works as an audit consultant for Melville Consulting, an investigative firm that stays off the grid with client projects that have secretive names. Her first assignment is strictly off-limits with the pre-assigned codename Project Onion. This begins her exploration of the flow of money management, leading to a money-laundering scheme by a notorious drug lord who goes by the name of El Rey (The King). This will put Kathryn in a life-threatening situation. But she needs the job, and she will have to decide whether to fight back or be broke.

Project Onion may be a vicarious action-packed experience, but it is never superficial. Karen Stensgaard knows when to slow down and look carefully at moments showing how Kathryn gets herself into sticky situations, and she uses Kathryn’s keen, observant POV well. Dialogue moves the story forward as Kathryn operates in a world where she is surrounded by many friends and colleagues, and the way they speak reveals plenty about their personalities. It is deeper than most suspense novels as it is based on courage and hope. There will always be cravings for messages of resilience and hope, and Project Onion offers a new suspense series well worth reading.

After a traumatic time travel experience, a CPA attempts to rejoin the workforce in the suspenseful novel Project Onion (The Melville Consulting Series Book 1) by Karen Stensgaard. After a seven-month cruise that traversed half the world in the 1860s, Kat Jensen is ready to go back to work. Having taken so much time off, finding a new job presents a challenge. When an old acquaintance offers her an auditing job in his covert investigating firm, she accepts. However, she must keep everything about her job secret. In the meantime, her boyfriend, Charlie, urges her to pick up their relationship where they left off the year before. While trying to accommodate Charlie and find a balance in their relationship, Kat goes on a weekend trip with him that places her on a yacht. As Kat struggles to maintain her emotional and mental equilibrium in facing her phobias while reestablishing connections with Charlie and making friends, she inadvertently gets caught in a web of intrigue that has ties to her new job.

Project Onion (The Melville Consulting Series Book 1) by Karen Stensgaard is a suspense novel with a supernatural tinge. Based on the Aquamarine Sea series, this story picks up where the series left off. The backstory colors the plot as it depicts how the protagonist, Kat, deals with her job, friends, and her new phobias after returning from her traumatic time-travel experience. Even though Project Onion is the first book in the series, reading the other two books in the previous one might make Kat's character and her neuroses easier to understand and relate to. For everyone who enjoys suspense novels laced with a hint of the supernatural, this book is sure to impress you!