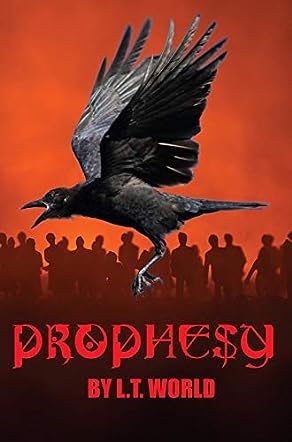 L.T. World is a graduate of Eastern Lebanon County (ELCO) High School in Pennsylvania and a current student at Lebanon Valley College (LVC). He began writing in seventh grade when his English teacher encouraged him to pursue a writing career. Dedicating a lot of time to his practice, L.T. began to submit literature pieces to magazines and publishers during his senior year of high school. Prophesy is his first published novel. When he's not writing, L.T. enjoys reading and spending time with friends.

In Prophesy by L.T. World, raised by a brutal and callous General, fifteen-year-old Tommy's huge heart and sensitivity are seen as weakness by his father. Tommy's home is filled with wealth and cold vengeful hearts. Since his mother died in childbirth, Tommy's only times of happiness and sense of belonging come from the kindhearted Doctor Common. When a prophet arrives in the town, warning them that The Beast is coming to destroy their kingdom, the townspeople mock his insanity. As they ignore his prophecy, death and misfortune befall many citizens, causing division and paranoia. As civil disruption between the king's soldiers and the people escalates, Tommy finds himself with nowhere safe to hide. As the city prepares itself for war and the arrival of The Beast, Tommy realizes the weak and vulnerable will be the first victims. The only way to survive the bloodshed is to fight.

The unusual storyline is gripping from the outset. The theme of Prophesy by L.T. World is not what you first imagine. This is a story with a powerful message about the morals and judgemental attitude of people. I loved Tommy; his caring heart, his sensitivity and his desperate need to be accepted were so endearing. The relationship he formed with the brilliant Doctor Common is one we all aspire to achieve. The behaviors of the characters reveal the best and worse personality traits of humanity. There are so many endearing moments entwined with the brutality of war and death. The suspense and thrills will keep you on the edge of your seat as you await the arrival of The Beast. I loved the analogies throughout, especially when the birds attacked a female character and Doctor Common described them as beastly creatures devouring the weak. This could have been used to describe the behavior of the warring factions. If you really study the message within the pages of this well-written novel, you will discover a profound message. What actually causes the destruction of people is not an outside force but the depravity, ignorance, and arrogance that we allow to consume us. The ending was spectacular and leaves you questioning your own values and behavior.

Prophesy is a work of suspenseful fiction with interpersonal drama and some speculative themes and was penned by author L. T. World. Written for adults, the book contains explicit content such as coarse language, scenes of graphic violence and some scenes of mild sexual content. The story centres on protagonist Thomas, who struggles to connect with his wealthy father due to their mutual resentment of one another. When a mysterious prophet arrives with portents that throw their city into disarray, a lost Thomas joins the revolution on the streets and finds himself even more lost amid the violence and the destruction that he witnesses.

Author L. T. World has created an interesting novel which begins as an interpersonal drama story about one young man and his struggle to fit in but expands onto a wider political, social and economic scale with its revolutionary messages. Thomas is a well-developed character to whom audiences can somewhat relate, but he has enough tension points about him to become a kind of anti-hero figure amid the chaos. One of the things I enjoyed most was the discrepancy between the worlds of the wealthy and the poor and the struggle of transition from one to the other. The class divide gives a sharp dimension to the disarray in the novel, and I found the level of violence and explicit content quite apt and not overdone considering the plot. Overall, Prophesy comes highly recommended to mature readers seeking something that is both entertaining and thought-provoking.

Awesome read! Creative idea for a story. Loved the main character and the many villains.

This amazing novel has so many layers to it. On the surface, it's a fast-paced, unpredictable ride. If you read it closely, you'll see symbolism on top of symbolism. The author subtly makes numerous commentaries concerning social issues, religious ideologies, political divides, and psychology. Every event, - no matter how insignificant it may seem on the surface - has a deeper meaning, and I found it enjoyable to recognize these intricacies. Kudos to the author for creating a memorable read. Can't wait for his next novel.