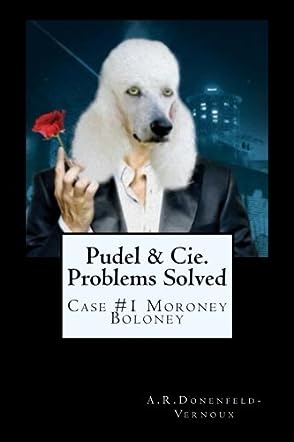 Moroney Baloney is the first case file in the Pudel & Cie. Problems Solved series by A.R. Donenfeld-Vernoux. Over three centuries ago, local wizard Magnus Pudel experimented in different types of magic. While trying to recreate the famed Elixir of Life, he drank one of his creations, transforming him into a poodle, leaving him able to flip easily between the form of a man and a poodle at will. Magnus’ future generations were also poodles (as well as other dog hybrids), with three becoming professional problem solvers. Antonio and his sisters, Belvidere and Callista, form the problem-solving agency known as Pudel & Cie. Problems Solved. Moroney Freedhoff is a socially awkward teenage heiress who seems to have hand-written an IOU for $100,000, which her grandmother, Mrs. Freedhoff, has agreed to pay without question or explanation. Pudel & Cie. are hired to trace the recipient of the funds and bring his/her blackmailing antics to an end. Moroney’s sister, Felicity, demands that the Pudels also try to locate her missing husband, but her demand is initially rejected due to a conflict of interests. When it appears the two might be connected, further investigations in both cases are pursued, bringing the case to a shocking conclusion.

The narration of Moroney Baloney is cleverly told in the style of film noir, making the story easy to visualize in black and white, just as the old detective stories appeared on the silver screen. A.R. Donenfeld-Vernoux has written an incredible and unique sleuthing novel which deals with issues such as blackmail, missing persons, homelessness, murder, pedophilia, BDSM, drug addiction, and even organized crime. Pudel & Cie. Problems Solved has served up its first case, Moroney Baloney, in a classy fashion, and their additional skill of flipping between being a dog or a human at will is convenient, ingenious, unique and, at times, downright hilarious. This dog-human sleuth mystery is the first of its kind for me, and the entertainment value alone was immeasurable. I recommend Pudel & Cie. Problems Solved to mature readers aged 15 years and over who are addicted to mystery novels which fearlessly deal with sensitive issues.