Confessions of an Addict in Asia 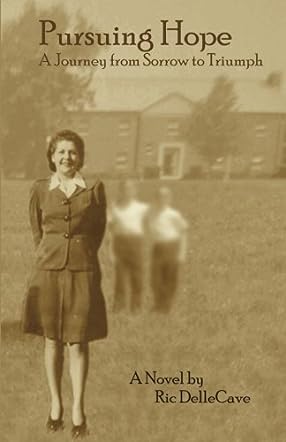 Ricardo DelleCave served as a pastor for twenty-two years in the eastern United States. He currently lives in western Pennsylvania with his wife of thirty-one years.

Ric has an extensive background in public speaking and has authored numerous articles.

Pursuing Hope, his first novel, is a compilation of personal and fictional events. It is a compelling story of abandonment, despair and hope. Set in the early sixties it depicts the silent sorrow of domestic abuse and the power of God's unconditional love to restore life.

Pursuing Hope: A Journey from Sorrow to Triumph by Ric DelleCave is a powerful novel based on a true story. It's a story of one boy's survival through years of abuse, not only from his mother, but at the orphanage and later from his stepfather. The main focus of the novel is about Rick Costello and the life he lived as a child growing up under some of the worse forms of abuse, not only physically, but mentally as well. With a father who has cancer and an alcoholic abusive mother, Rick and his brother, Joe, are placed in an orphanage for the simple reason their mother says she can't afford to take care of them. After suffering four years of abuse in the Shady Acres Orphanage, Rick and Joe return home, where Rick suffers more abuse at the hands of not only his stepfather but also his half brother. Through it all, the power and strength to survive keeps him going even though abused by many. When Rick finally learns to lean on God, the one who he knows will never harm him and give him unconditional love, only then can he finally forgive those who abused him.

I was not really prepared for what I was about to read. One reads of abuse and knows it happens daily, but this young child suffered more than most in a lifetime. Reading the book, you can feel both the hate and the love penetrating from the soul of Rick. As in the beginning, we find Rick and Joe both being abused by their mother; but once at the orphanage, they are separated. We never know if Joe suffered the same abuse as Rick. With the main focus on Rick, we learn Joe stays with friends instead of at home, and in my mind, I feel he escaped much of the abuse. Reading this book, there was one thing that came to my mind: no matter what happened or how much he was abused, Rick never lost hope. Even though he hated his mother, in a way, he still loved her through it all. This is an amazing journey through the life of Rick and how he becomes a strong person in the end with a family of his own. Based on true events, it takes a strong person to bear his past to others. I do know that once you pick up this book and start reading you will not put it down till you have finished.