Death on the Danube

Death on the Danube White is the Coldest Colour A Thousand Miles to Nowhere by Jack A. Ori

Struggles and Triumphs on the Journey to me.
by Fabian D. Robinson
Non-Fiction - Memoir
106 Pages
Reviewed on 05/08/2017 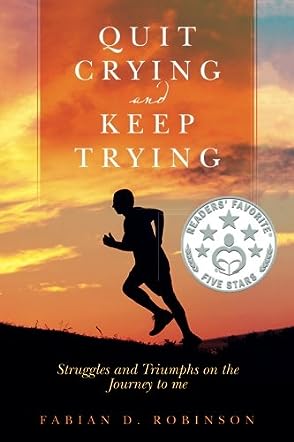 Fabian Robinson is an emerging writer who spent ten years of his life teaching integrated science and social studies in Jamaica. He is a dedicated husband and father of two children. He loves people and children, this love for children contributed to him being a very affable teacher. His first book reflects on experiences throughout his life. These experiences sometimes evoke feelings of slight sadness but more often feelings of pleasure and are ultimately uplifting. His writing is predicated on humility, and decorated by motivation.

Quit Crying and Keep Trying: Struggles and Triumphs on the Journey to Me is a non-fiction memoir written by Fabian D. Robinson. Robinson grew up in the Westmoreland area of Jamaica, an agricultural area that was defined by sugarcane production. While his grandmother ensured that he went to school, where he frequently got in trouble for his propensity to make mischief, like many other children in the area, he also learned to cut cane at an early age. Robinson’s father was a policeman who never failed to stress the importance of an education for achieving a better quality of life, and his mother was a businesswoman who owned and operated a bar and grocery, but it was Mim, his grandmother, who was the central figure in his life. Mim had raised nine of her own children and many of her grandchildren as well. No one was ever turned away from her door, whether they were friends or total strangers. Robinson was fourteen when Mim passed away, leaving him bereft and shattered. Now, twenty years on, Robinson has a family of his own with a son who is fourteen and a five-year-old daughter. He is providing for his family and successfully brought them to the United States. This book details how he did that.

Fabian D. Robinson’s inspirational non-fiction memoir, Quit Crying and Keep Trying, is a frank and moving account of the author’s perseverance and resilience in fulfilling his and his father’s dream of upward mobility. I loved reading his stories about the big, black van which propelled his first business venture as a purveyor of fruits and his foray into farming. Likewise his stories about his educational experiences are fascinating, even those frustrating times when he experienced the inevitable snags in transferring credits and having his teaching degree accepted in the United States. I was pleased to learn that Robinson had completed his studies at the State University of New York’s Empire State College, an institution I’m very familiar with and endorse wholeheartedly. Robinson never did stop trying and his story is a marvelous tribute to his determination. Quit Crying and Keep Trying is most highly recommended.

The book is a great read and it's very inspirational to me as someone whose an aspiring writer as well. Mr. Robinson made me feel as if I was living his experience with him. Very visual with his writing. Thank you for sharing your experience

Things in this book remind me of growing up back home. Crab season is one , and like Robinson my mother was around but my grandma (mama) was the one to grow 7 of us grand kids. I was also very young when mama pass away and every time I thought of her my heart breaks still missing her to this day some thirty something years later. Loving the book very inspirational.

It's been a while since I read this book, went to the doctor and I carry my book to read while waiting to be called. It's amazing how growing up in the Islands is so different than it is in the U.S. Teachers and principles cares about the students in the school and always have something positive to say. They go out of their way to assist every students regardless of what they have or don't have. I remember the days when our primary school principle and teachers would beat us when we get into trouble. Using profanity was never ok in or around the school yard. Also, when we are on the street using profanity and people in general would tell us that our parents need to wash out our mouth with jeyes. Regardless, of what our circumstances is we can persevere through anything as long as we are willing to put in the hard work. With the little support his uncle gave him, as well as his teachers Robinson was able to change is outlook on life and go on to becoming a teacher himself, and inspiring others around him. Still loving the book!

The book Quit Crying and Keep Trying by Mr. F.D Robinson is a wonderful book. It has arrested my attention and lured me to read page after page with little thoughts of taking a brake. The book, in a short but powerful way not only, tell the story of Mr. F. D. Robinson but also what was the way of life for many Jamaicans who as Mr. Robinson rightfully put it were set at a disadvantage state from the start of life. The book tell how Mr. Robinson overcame. The title is an epic reminder to the readers that quitting is not an option for the individual who desire success. I am sure that anyone who reads this book will be motivated above odds.