Success Against the Odds One Woman's Story of Family, Love, and Loss in the Horse Racing World
by Dawn LeFevre
Fiction - Womens
253 Pages
Reviewed on 09/18/2021 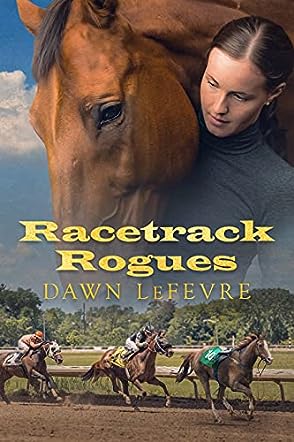 Dawn LeFevre began working on the backstretch of Atlantic City Racecourse at the age of sixteen. After graduating from Cook College of Rutgers University with a B.S. in Animal Science, she spent the next thirteen years training and racing horses in New Jersey, Pennsylvania and Delaware. She currently works as a contributor for www.PastTheWire.com and her articles have been published in Equus, Weird NJ, the Pacific Coast Journal and The Press of Atlantic City.

Dawn lives in South Jersey with her husband Mark, Australian Shepherd Domino and her cat Tribble. You can catch her latest news and read her Tales From The Wine Trails blog at www.dawnlefevre.com.

Dahlia loves animals, particularly horses. She grew up around them with her mother, Marilyn, being a star jockey. Marilyn had hoped Dahlia would follow her example and become a jockey, or at least a trainer. At nineteen, though, Dahlia was more interested in university grades and her goal of becoming a vet rather than the racetrack life that ruled her mother. Then she learns that her mother has died suddenly, and her grandparents are struggling to keep their horse farm afloat financially. A dangerous horse threatens not only Dahlia’s grandfather but also their ability to save the farm. Remarkably, Dahlia has a knack with horses, and she manages to do what others can’t - train this dangerous horse to race and maybe even win. Lured back to life on the track, Dahlia stumbles into one mystery after another while going through her mother’s things. And some of these mysteries threaten a growing romance between her and the son of a rival trainer. While Dahlia quickly establishes a reputation for training the untrainable, the plot continues to thicken, and the romance sizzles. But, she still can’t remember what she last said to her mother, a tragic family eclipse that haunts her daily.

Dawn LeFevre’s novel, Racetrack Rogues: One Woman’s Story of Family, Love, and Loss in the Horse Racing World, is a fast-action, powerful story that will engage horse-loving readers of all ages. The author has woven a plot full of horse racing, training, romance, family ties, and so much more. It’s a high-energy story that lures the reader right from the first page. The characters and situations are believable, and the author’s knowledge of horses and horse racing is obvious. The dialogue and narrative are well developed as both characters and settings are established, allowing the reader to feel instantly comfortable within the story, which is powerful and thrilling right to the very end.