A Fray of Furies Sins of the Bees by Leslie A. Sussan 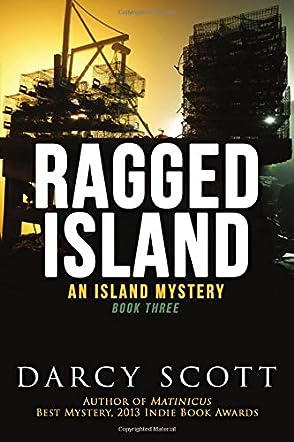 Award-winning author DARCY SCOTT (Best Mystery, 2013 Indie Book Awards; Silver Award, 2013 Readers Favorite Book Awards; Bronze Award, 2013 IPPY Awards) is a live-aboard sailor and experienced ocean cruiser who’s sailed to Grenada and back on a whim, island-hopped through the Caribbean, and been struck by lightning in the middle of the Gulf Stream. For all her wandering, her summer home and favorite cruising grounds remain along the coast of Maine—the history and rugged beauty of its sparsely populated out-islands serving as inspiration for much of her fiction, including Margel’s Madness and her popular Island Mystery Series (Matinicus, Reese’s Leap, and Ragged Island). Her debut novel, Hunter Huntress, was published in 2010 by Snowbooks, Ltd., UK.

Darcy Scott’s Ragged Island tells the story of botanist Dr. Hodges, known as Hodge to most, through a compelling mystery of murder and deception. Strange events, such as finding a severed finger on his keyboard, seem to be only the latest of tactics from Tiffany – a terrifying woman from his past who has since been receiving mental health care at Hodge’s expense. When Hodge is confronted with the reality that Tiffany, and all that she represents, is keeping him from finding love and happiness, he opts to put a stop to her psychotic tyranny by returning to Matinicus—the island where it all began. This journey reunites Hodge with many people from his past, including the family of the murderous Tiffany, and rekindles a rage in several locals for the murders and lies which occurred years ago. Hodge finds a companion in Cash, another colorful character from the past who doesn’t see eye-to-eye with Hodge, and the two work together when another murder on the island seems to point to Tiffany. Seemingly motivated by reclaiming her long-lost child, Tiffany appears to be unstoppable. As the story unfolds, more lies, murder, and deceit are uncovered.

With its incredibly vivid dialogues and well-formed characters, I found Ragged Island to be a pleasure to read. Darcy Scott pulled me in with action and mystery and did not let go. Ragged Island contained several twists and turns; when I felt as if I had things figured out, I was taken for another loop. I commend Darcy Scott for her remarkable dialogue, which truly brings the characters to life. Ragged Island is a unique mystery, filled with emotion, action, and enigma. Hodge reminisces about a drinking game he used to play involving pairing girls with a tree to fit their personality. He compares Tiffany’s tenacity and perseverance to a sequoia and explains: “She was both those things, as it turns out, only not in a good way.” This was a truly unique component that brought Hodge as a botanist to life and symbolized the growth he had made while transitioning from a womanizer of sorts into the man he had become. I empathized with Hodge as the results of Tiffany wreaking havoc in his life became apparent and botched his efforts to find love with someone new, Julia. Ragged Island, which is the third book in the Island Mystery Series, is a very good read—well done, Darcy Scott.