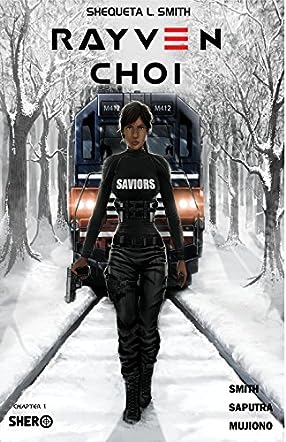 Shequeta Smith is an author-filmmaker with multiple projects under her belt. In 2014, Shequeta beat out five thousand filmmakers to be selected as a Top 20 Finalist in HBO's Project Greenlight with her comedy teaser trailer, "The Gestapo vs. Granny". She was the only female, solo director selected in the competition. In addition to this, Shequeta wrote, directed and produced the short film, “The Takeover,” that has been featured in multiple film festivals and has garnered over two hundred thousand YouTube views. Most recently, Shequeta successfully released a 14-minute short film and the first two books in her six-part Korean-American graphic novel series, Rayven Choi. Both the film and book are based on her award winning screenplay.

Rayven Choi: Chapter 1: Koreamerica by Shequeta Smith centers around the main protagonist the book is named after. The very first scene shows us that Rayven Choi is not kidding around when she shoots a man almost point blank. But who was he? At a young age, Rayven was forced out of a normal life when somebody put a hit on her father, which resulted in a bloody train massacre, leaving her without both of her biological parents. Rayven is the sole survivor. The police and FBI get involved when the assailant tries to go after Rayven once more and it becomes clear that as long as Rayven is in America she will never be safe. Luckily, Rayven’s father had befriended a man in South Korea where the story takes place years later and truly begins to unfold.

Overall, the illustrations and colors were marvelous. I appreciated the care given to the small details in their facial expressions; it brought the characters to life and it made me wonder who said that graphic novels and comic books are not literature? Shequeta Smith gives us a well written graphic novel that breaks away from the comic book superhero stereotype to which many have grown accustomed. Here is a story that has espionage, tragedy, drama, and a well developed main character. Smith produces one of the fiercest female characters ever created, and she doesn’t need a leather spandex suit or a cape! As the plot thickened, I found myself engrossed, I became deeply invested in Rayven and her life. I cannot wait to get my hands on the rest of this series.

Rayven Choi: Koreamerica is the first graphic novel in the Rayven Choi series, written by Shequeta Smith. A man kneels in the woods, mocking her, daring her to pull the trigger. She is filled with so much hatred, loathing and anger. BANG! Rayven’s obsessive thoughts overwhelm her constantly. Lying on a psychiatrist’s couch, Rayven recalls her childhood, with focus on the day that altered her destiny. Her memories take her back to twenty years earlier on a train, when Rayven’s father had just returned from military service on Christmas Eve. He tells his wife and daughter that he has just one more thing to do and then he is home forever. While Rayven is in the bathroom, killers storm the train and execute everybody on board. Rayven watches as her parents are killed, including her father, but not before he shoots back, buying her time to escape. Although eventually rescued by the authorities, Rayven is seen as a loose end which must be eliminated. Driven into witness protection, Rayven travels to Korea to be raised by the Choi family. After becoming a master in Hapkido, as well as gaining her Masters in Computer Engineering, Rayven ponders returning to America in order to find her purpose in life. As she hugs her childhood teddy bear, she makes a shocking discovery.

A tale of action, drama and tragedy, Rayven Choi is masterfully created, beautifully illustrated and pulls at the heartstrings like never before. The images drawn throughout are powerful, starting with a man being executed whilst on his knees, before the story moves to a psychiatrist’s office, with Rayven telling of her tragic tale. Growing up with a target on her back since childhood, Rayven goes from being an innocent child with not a care in the world, to being raised on the opposite side of the globe by strict foster parents, mastering martial arts, and reliving the events of her parents’ deaths over and over again. The warrior that she becomes leaves me breathless, desperate to learn more about her and see what happens next in her incredible life. There is so much mystery surrounding the executions on the train, as well as how the killers keep finding her location. Shequeta Smith’s fast-paced, action-packed tale of retribution is one that I enjoyed, and strongly recommend to fans of survivors and budding superheroes in the making.