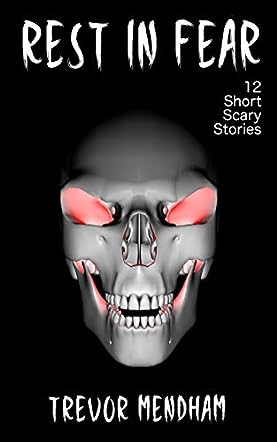 I'm Trevor, an English writer now living in Edinburgh. Over my fifty something years I've had many jobs, the most interesting of which was acting as a guide on one of Edinburgh's famous underground ghost tours. Spooky!

A man digs himself out from his grave and discovers that death has changed him. A woman takes a short cut on her way back home and finds her path blocked by a clown. A distressed man going to work on a Monday morning is greeted by a cherry tree. A little girl is scared of the monster under her bed. A call center receives a call from a man claiming to be alive, six months after he was declared dead. A man is lured by the sound of music coming from the woods. A man is troubled by a goblin who raids his fridge every night. Rest In Fear by Trevor Mendham is a collection of twelve such short stories.

The book explores various shades of creepy and scary and is a quick, enjoyable read. It is not a jump scare, but you don’t necessarily need an old-school haunting to turn your stomach. The stories tend to engage your imagination, and it is the after effect that hits you more than the story itself. Rest In Fear by Trevor Mendham is exactly what its name suggests. The stories create an unsettling effect and the impression will linger with you for quite some time. A few stories portray the contemporary and often encountered problems of daily life. Out of the bunch, one particular story stands out the most for me. It is ‘The End’. I agree with the author on the perspective he has presented through this story. I bet that every reader will find something in this book that’ll rattle their brains.