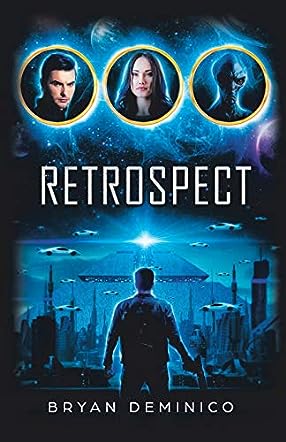 Bryan DeMinico is an Army ROTC Distinguished Military Graduate who served two tours in Iraq in support of Operation Iraqi Freedom. A born Floridian, he played trumpet in the Broward Community College jazz band and was a P'an Ku literary arts magazine staff member, beginning catalysts for his creative side. After nearly 10 years in the United States Army as an Armor Officer, he transitioned into civilian life. A love for sci-fi and action/adventures like Bond gave inspiration for his first book entitled Retrospect.

The planet has evolved and Earth has been utterly transformed. Under the United Planetary Congress, alien races coexist with each other, but huge trouble starts when an encrypted code that can cripple the artificial earth is stolen. The famous agent of the Galactic Interpol Society, Jonah, enters the District of Revised Washington and finds himself plunged into a nightmare of lies, political maneuvering, and intrigue involving a novus crime lord who runs a terrorist organization. He supports a powerful politician and a rogue agent who is there to get Jonah. Atlas is hugely threatened and the only hope of survival is agent Jonah. Can he navigate the complex landscapes and the traps laid for him and beat a powerful political enemy fighting for control?

In a genre that is fast becoming saturated, Retrospect by Bryan Deminico is a great achievement, a deftly written sci fi novel with futuristic themes and a setting in 3421. The narrative begins with intriguing events and action, and the reader is immediately introduced to the conflict: “The power went out, and multiple illuminated cylinder strands intermittently extinguished inside the home. Ophelia and her husband, Danieux, stopped their breathing. They looked at each other’s dimmed faces.” Bryan Deminico invents a future world that is unlike anything we know, but one that readers quickly learn to navigate and to feel comfortable in. Technology has evolved and it is evident in the setting, in the language used by the characters, and in features of the world to which readers are introduced. The key characters as well as the minor ones and the vivid setting in Retrospect will please fans of sci-fi.

A great read with twists and turns a page turner cant wait for more. It would make a great scifi movie