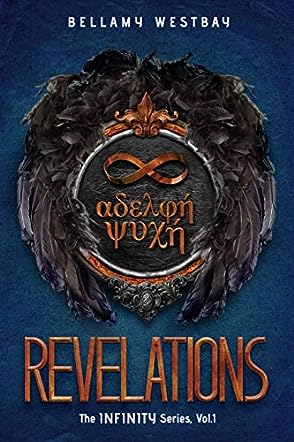 Bellamy Westbay is the author of The Infinity Series, a paranormal romance series with a unique take on the age-old tale of humans and angels falling in love. Bellamy served honorably in the United States military and is now one of the few women working in a highly competitive scientific field. Despite her demanding job, she’s a child at heart, loving roller coasters and loud music, but like any self-respecting introvert, her first love has always been reading. As a child, her favorite genre had been science fiction, but she’d happily read anything from fantasies, mysteries, to thrillers, even going so far as to stealing her older sister’s used college textbooks. It wasn’t until recently that she finally delved into romance and found her new love affair. She flew through the stories, submerging herself in the emotion and passion that had seemed so absent from the cold science she’d loved for so long. As she read, ideas began to swirl through her mind, creating stories that seamlessly combined her two conflicting loves into something uniquely beautiful. Then suddenly, a writer was born…

Revelations by Bellamy Westbay is an intriguing romance novel with some fantasy, paranormal, and supernatural elements. The story begins with our heroine, Gwen, dreaming that she is on a beach. The only reason she knows it is a dream is because, although the details of the landscape are so vividly real, only four of the five senses are affected. There is no sound. Every single night for the last four years, the same faceless man had come to her here; in her dreams. In reality, Gwen has a constant circle of close friends; spoiled queen bee Hannah, grounded Beverly, and Gwen's male companion, secretive Ky. Gwen's parents are the campaign managers for Hannah's father. Then at a fundraiser/gala the next night, enter Alexander Prescott, son of Prescott Tech's CEO Eli Prescott/ People's "Sexiest Man Alive." Alex has his eyes on Gwen until Hannah comes into view. She is the spitting image of the love of his life. When Hannah starts flirting with Eli, Alex signals his mother to intervene. Then, of course, Hannah's attention turns toward Alex, especially since she saw him dancing with Gwen. Events really begin to heat up when Alex enrolls at the same college, and takes a couple of the same classes as our rivals. When they all audition for a steamy type, 'push it to the limits' play, it doesn't sit well with Hannah when Gwen is cast as Alex's leading lady.

Bellamy Westbay tells this well written story through the eyes of the two main characters of interest, Gwen, and Alex, except for one small chapter, "Unknown," in which a mysterious man knows about Alex's past, which I thought was really clever on the author's part. The author does an outstanding job of describing the emotions and thoughts of the main characters of the story, although they do remind me of another famous love triangle when they returned to Riverdale as adults. Bellamy Westbay is very adept at what literary agents refer to as being able to, "spin some yarn." Book 1 of the Infinity Series, Revelations is a masterfully written story with everything you could ask for in a page turning, romance adventure. I am looking forward to the next installment with bated breath!

What a great book! I loved the adventure. I loved the characters! I can't say enough about this book. It was great for me! I liked Alexander, Gwen and Ky very much, they made the story come to life for me. I know this is the first in the series and I'm glad there will be more! *This book was given to me for free at my request and I provided this voluntary review.*
https://alyscrusinlifeandbooks.wordpress.com/blog/

Gwen is a lonely girl who's always left alone by her parents, who keeps having boy issues, and feels like an emotional yo-yo, but she still remains her sweet and caring self. She likes helping people and she likes taking care of people.

Ty has been one of Gwen's best friends for a couple of years, but he's always longed for her. Once she gave in and started dating him he betrayed her trust and left her brokenhearted and without the friend she once had.

Alexander is an angel. He's fought may wars for Heaven, but his hardest battle is yet to come. He's torn between the visual version of his long ago lost love and the girl whose every sense calls to his own. One will love him and one will betray him in the most evil of ways.

Revelations is an engrossing story that will hold you captive with its suspense...that is if you can get past the ever jumping the storyline does. I started dreading the infinity symbols as every time they appear the story jumps forward. Sometimes it was easy to follow, but more times than not it took a minute to figure out what happened and where I was causing the spell of being engrossed to be temporarily halted.

All I can say is just when you think you know a character beware because no one is as they seem and I have a feeling that there's more to come as the series continues. The writing style may not be my favorite, however, the story itself is interesting enough to make me want to continue reading just to see where it goes. Of course, that may have to do with the slight cliffhanger book one ends on.

I have read this book a few times! I love how Gwen is so relatable to me (and that she's not 16 years old and is an actual adult) Alex is sexy and manly. Jasper is my favorite bad boy, I just really love this book! I can't wait for more in the series and more books by this author.

Good book. This isn’t one that I sought out, but thoroughly enjoyed it. For those reading my review wanting to know what this book is like, I’d tell you that this book is comparable to the Stephanie Meyers’ Twilight series. In contrast, I like how there is a lot of thriller and mysterious aspects to this book- it seems to me to be written more for adults by not given everything away by explaining things the second it is brought up. Again this isn’t a book that I sought out. Nor is this a book I would typically want to read. But now I’m upset that the second book isn’t already out. The first one had me hooked!!!

A Tangled mess of destiny

The story has several characters, and each one has his or her own story, and bring a great value to the plot. The story is filled with lust, revenge, and jealousy and what it brings out in each person. A mix of humans and angels lend to the story, adding a twist to what is to come. It flows well and I'm sure looking forward to whatever story may come next from this.

“Gwen Adams faced a tough decision. On one side there was Alexander, the rich, powerful, devastatingly sexy man who intoxicated her with his very presence. On the other, the poor, hardworking, and gorgeous Ky, who'd earned her friendship and stolen her heart.
Alexander Prescott was bored with the predictability of eternity when his world was rocked by a beautiful woman who looked exactly like his long-lost love. Even though she was human, he knew he'd found the woman destined for him. That was, until he met Gwen.” (Excerpt from the Amazon synopsis for the book, Revelations.)

The blurb for Bellamy Westbay’s fantasy-romance, Revelations, dips our proverbial toe in the water. This story is a tsunami of multiple love triangles coupled with levels of beings­; humans, 14,000 year-old angels and a mix of the two; hybrids. Alex loves Eva who loves him but weds Lew. Hannah loves Alex and sleeps around, but Alex loves Gwen who thinks she loves Ky because he loves her. There is plenty of pining, craving and sweaty, lust-filled passion to keep you forging ahead. Written in alternating character first person past tense, author, Bellamy Westbay reaches for the stars with this paranormal celestial romance.

Less about revelations than it is about destiny, Revelations is not a Christian story. It should not be confused with the Book of Revelations from the bible. This book simply reveals fictional prophecy through the character’s dreams and imagery. These subconscious ‘revelations’ show us the protagonist’s love-longings and fears. Even before Gwen meets her foreign prince, she dreams of a hot, faceless protective man on the beach to whom she feels passionately drawn. The mystery dream man could be one of several different men. It’s a puzzle. Conversely, she dreams of wickedness and it has a face; and one we don’t expect.

God is capitalized throughout this narrative which could lead one to think the ‘heaven’ referred to is the Christian’s heaven from the bible. It’s not. We learn about a ‘creation room’ where God is still busy at work creating new universes though a large hole in the room’s floor. It’s entertaining, but not a source of religious information by any stretch.
​
Although heavy on the romantic, lusty heat index, there is no consummation; mainly kissing, plenty of hot body description and yearning. The content of Revelations is heavily laced with profanity with over 120 uses of the F-bomb and 65 assorted other curse words. If you enjoy a non-erotica, paranormal romance—essentially 400 pages of foreplay with a cliff-hanger ending—then this book is for you. I rate this book 3.5 out of 5 stars.
​I received a free copy of this digital book in exchange for a review.

A truly fascinating first book of this series it has been. Its driving me CRAZY wanting to see what happens between Gwen and Alexander!!! Trust me you WONT be able, nor want to put it down!!!!!!! YOU WONT BE SORRY!!!!!!!