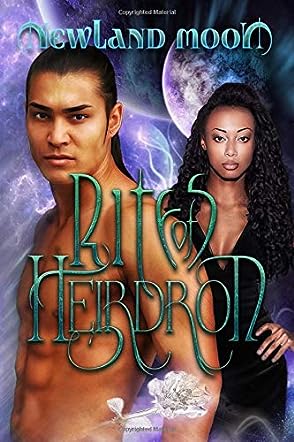 Newland Moon is a Speculative Fiction author originally from Illinois. Even before she started kindergarten, she loved to read. That love only grew and blossomed into a love of writing as well.

Since 2015, she has written eight full-length novels and published four. She loves creating complex, diverse characters and multi-layered plots. Rites of Heirdron - Book I is her first Science Fantasy Romance novel.

When she is not wrangling stampeding miniature dachshunds, being super mom, managing her 9 to 5, or skillfully navigating a grocery store with the skill of a master, she enjoys reading new authors and discovering new worlds.

A beautiful blend of sci-fi and fantasy, Rites of Heirdron by Newland Moon is the kind of opening readers would want for a series that is engaging and entertaining. Zrahnz is a character readers will love, a bastard prince, scorned and derided as the “unclaimed,” and one destined to save his people and restore the health of his planet. These are turbulent times, with neighboring powers conniving to create havoc on his world. He will have to understand a shady past, discover a prophecy that has been long forgotten, and find the right allies if he's to be recognized as the legitimate ruler of his world. But first he must be healed from a disturbing illness and understand why he is irresistibly drawn to the Earthling, Itanya, and why she has such a powerful effect on him.

The entertainment in this epic tale is huge. I enjoy stories that start in the midst of action and Rites of Heirdron is one such book. It begins with a serious training activity and the reader gets a feel of the agony the protagonist goes through. Zrahnz’s plea to Raydren to stay with him already suggests that the conflict would be huge, and it turns out to be so. The plot is woven with intricacies, with a cast of solid characters littered across the beautiful setting, a plot infused with intense action.

The idea that the protagonist gets treated like an outcast is captivating, a perfect allusion to the biblical image of the rejected stone that became the cornerstone. Newland Moon has the gift of integrating strong themes like love and friendship, loyalty, faith, and redemption into a beautiful story in a seamless manner. The writing is flawless, crisp and tight, with vivid descriptions that capture the intense action excellently. You’ll be pulled in and it will be hard to take your eyes off the characters.