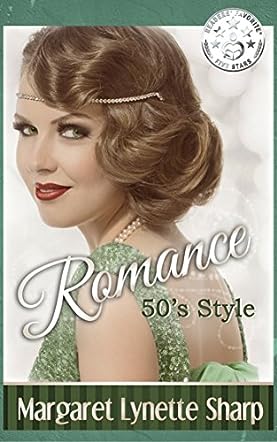 Margaret Lynette Sharp is an Australian author. Since 2010, she has written and published more than twenty titles. Almost all of these are stories of love and romance. Her favorite era is the 1950's, and a number of her more recent titles are set in it.
Margaret is happily married to the well-respected, retired pipe organ builder Ronald Sharp B.E.M., who is best known for his creation of the Grand Organ in the Concert Hall of the Sydney Opera House.
The couple live in suburban Sydney, with their little white dog, Chicki, and two blue budgerigars, Albert and Victoria.

Romance, 50’s Style by Margaret Lynette Sharp is a set of two nostalgic stories of romance in the 1950s. Whatever it Takes is the first story, set in both Sydney and in London. Lisa is studying in London and finds herself falling hard for Liam, a trainee teacher alongside her. Her father turns up and demands that she return to Sydney for his wedding, but Lisa doesn’t want to go. She has little choice in the matter and her return lands her firmly at the feet of the last person she expected to see. Can Liam and Lisa’s new relationship survive the strain of separation? The second story, Sisters and Rivals, is set in Sydney with Linda who lives with her parents, and her brother and sister. Linda has lost more than one boyfriend to her sister Tessa and is holding back on introducing her new one to the family. Tessa has just got engaged and Linda hopes that this means everything will be okay, but what will happen when Linda introduces Harry to Tessa?

Romance 50’s Style by Margaret Lynette Sharp is an entertaining book of two different stories. Both are designed to take us back in time, but the main themes are the same as they are today with young people. Ms. Sharp conveys the era very well and anyone who remembers it will be taken on a little trip of nostalgia. The characters were incredibly well developed and very likable; characters that can easily be identified with. The stories themselves were well thought out and very descriptive with a natural flow to them. Although they were two very different stories, they had common themes that melded well and made it easy to move from one story to the next. Lovely book, I really enjoyed it and I'm looking forward to more from Ms. Sharp.