The Life and Times of Rowan Daly 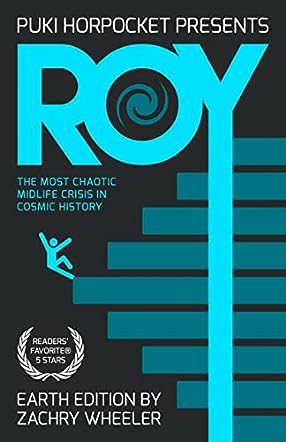 Zachry Wheeler is an award-winning science fiction novelist, screenwriter, and coffee slayer. He enjoys English football, stand-up comedy, and is known to lurk around museums and brewpubs. Learn more at ZachryWheeler.com and claim your FREE eBook!

As an interstellar traveler, I am always loath to come to such backwater worlds as Earth but imagine my surprise upon arriving here and seeing that this apparently insignificant part of the universe had an earth translation of one of the most entertaining accounts of one of the most horrible events in the universe. I refer, of course, to The Incident on Durangoni Space Station. Now, having read the original account of Roy by Puki Horpocket (a literary master without parallel in the universe), I was curious to see whether this Earth-based translator had managed to keep to the purity and essence of Puki’s original, or had managed to muck it up like most Earthlings tend to do. I was not disappointed. Mr. Zachry Wheeler has managed to capture not only the overall story of Roy and The Incident, but he also has picked up on the little nuances that make a Puki Horpocket masterpiece. Let me step back a moment and give a little background. The Incident took place on Durangoni Space Station and very little is known about the events leading up to it, but it created one of the most chaotic and traumatic periods on Durangoni. No small feat when you consider that Durangoni is the universe’s largest space station, home to over a trillion people. What is even more interesting is that the one person who seemed to be at the center of The Incident, a humble plumber by the name of Roy, was going through a major midlife crisis. That Roy today is hailed as a folk hero on Durangoni is a testament to his own status and appeal.

Mr. Wheeler (translating Puki’s work) has managed to capture Roy’s essence. Through a series of interviews with Roy’s friends, co-workers and acquaintances, and by compiling together the many small strands of evidence and the few remaining eyewitness accounts, we better understand both Roy and The Incident. This is a compelling story that reveals itself over time, like the fine layers of a zabarti (I believe you Earthlings have something similar called a parfait). We see who Roy is, from a meek sub-core citizen dejected with his place in the universe to an exalted folk hero (despite all the problems he caused). We meet his friends and see how Roy’s attempt to change his lot in life goes spectacularly awry. Roy is a wonderful bit of storytelling and character development rolled into one with the threads of Roy's story and The Incident neatly coalescing at the end. We not only understand how the events happened, but also come away with a better understanding of Roy the person and not the myth. Now I will unabashedly admit that I am biased in my praise, having had the pleasure of actually meeting Puki Horpocket himself and getting a signed copy of the first edition of his book. But Puki’s story has found a most satisfying champion in Zachry Wheeler who manages to do justice to this most interesting tale. I greatly urge any of you Earthlings who love a ripping yarn about a down-on-his-luck plumber who goes through the most epic and chaotic midlife crisis in the history of the universe to pick up a copy of Roy. You will not be disappointed.

Before "The Incident," Roy was just your average working-class plumber and divorcee trying to support his three million children. Roy: The Most Chaotic Midlife Crisis in Cosmic History by Zachry Wheeler is the wildest, most chaotically fun science fiction book I have had the pleasure to read in a long while. It's also a bit meta. Told from the perspective of Puki Horpocket, the story takes place on the Durangoni Space Station. Puki is investigating Roy, who was the catalyst for the biggest mystery in the story called "The Incident."

The best aspects of Wheeler's writing center around two things: worldbuilding and Puki's investigation, both of which complement each other. In less than 200 pages, Wheeler conceptualizes Durangoni's social structure and system without making it feel like an overload of exposition. Readers understand early on that the Durangoni is an enormous space station. It houses all sorts of alien species from different and diverse backgrounds from all over the galaxy. With that seed of knowledge planted in readers' heads, the topsy-turvy aspects of the story become sensible. Then we have Puki's investigation of Roy. Puki can't speak to Roy, but he is determined to find out as much as he can about Roy. This little dilemma leads readers to meet many colorful characters who know Roy. In one fell swoop, readers get a vivid image of Roy and the Durangoni through the eyes of said characters. I hope more people hear about Roy and the Puki Horpocket series because it is out of this world!

Roy: The Most Chaotic Midlife Crisis in Cosmic History is a satirical sci-fi comedy novel written by Zachry Wheeler. The narrative focuses upon an investigative reporter named Puki Horpocket trying to discern the whereabouts of the man responsible for The Incident on the largest space station in the universe, Durangoni. Tired of his life as a divorced man forced to pay alimony to his gold-digger of a wife alongside child support, Roy, a plumber, sees a way to turn his life around when Gamon, an influential trafficker, hires his services. As Roy works his way up to accumulating mega riches, he slowly comes to realize the plight of his friends. After bailing on a job, he finds himself triggering a chain of events that leads to The Incident, something no one wants to remember.

If you're a fan of satirical works such as Sir Terry Pratchett's Discworld, you're going to love Roy. With a delicious mix of humor, snappy dialogue, and numerous twists and turns, author Zachry Wheeler explores significant issues that mirror and have relevance to our real world. Wheeler's meta-commentary on socio-economics and class divides prevailing in modern society feels spot on, and he deftly incorporates those themes into the narrative. At no point, does it feel preachy or shoved in your face. The characters are vibrant and full of life. Each character oozes personality and seems to pop out of the pages. The dialogue is sharp and concise, quite often laden with sarcastic humor and wit. You can't help but root for Roy. This is an absolute banger of a novel that I would recommend to anyone who enjoys well-written satire.

Roy: The Most Chaotic Midlife Crisis in Cosmic History by Zachry Wheeler is now available in Earth Edition, thanks to Zachry for decoding the complicated alien tongue. The planet-size Durangoni Space Station, the largest in the universe, is home to over a trillion residents made up of diverse species and cultures. Roy, a successful plumber, is considered a folk hero but disappears after an incident involving a plasma fire. Puki Horpocket is the editor for the periodical on the space station and investigates Roy’s disappearance, which leads him to organized crime boss Gamon and his assistants Zip and Werner. Puki interviews anybody who can help including friends Duncan and Clancy as well as Vierra Belliosa, an engineer who designed several of the core’s components. Numerous interviews with Roy’s inner circle provide clues to Roy’s disappearance.

This story is both interesting and unusual. Zachry’s version is perfectly decoded and includes hilarious phrases such as “noozipup with a parpalapple” (squirrel with a nut). The various alien characters, scenes, and locations are all well described, helping the reader to form a mental picture. The construction of the planet is an engineering marvel and provides all the resources required by the residents. The story is smooth flowing from beginning to end and includes all Roy’s adventures and thoughts. I loved the way Puki conducts his interviews, both informative and funny. “Puki is renowned for his unique blend of commentary, interviews, and dramatic depictions.” Overall, Roy by Zachry Wheeler is a fantastic story, well written, and a quick easy read. Highly recommended to all adults.

Durangoni is a fictional space station bigger than most planets. It houses a trillion residents, many from other worlds, who come in search of employment and prosperity. Durangoni provides opportunity, but rather like planet earth, it has a well-defined class system, so the wealth is not spread equally. Author Zachry Wheeler introduces the central character, Roy, through the eyes of Puki Horpocket, an author and researcher who is curious about Roy’s enigmatic past, rise to fame, and mysterious disappearance. Roy is a working-class plumber, whose surname is never discovered, but who has talents far beyond his lowly station in life. Following his divorce, he is supporting a multitude of children on his former home planet, leaving him impoverished. Roy is unappreciated, depressed, angry, and leads a meaningless life. He finds solace in a sleazy pub named “The Pipes”, where he drinks with his best friend Duncan and other regulars. In search of recognition, Roy decides to change his life and becomes involved with the underworld. He is acknowledged and well paid. Ultimately Roy rebels and his actions result in “The Incident”, which affects the entire space station. Roy achieves cult hero status but vanishes without a trace.

Zachry Wheeler describes the often surrealistic life on Durangoni in a quirky, whimsical, and humorous style that befits such a strange and artificial setting. The plot reflects two often overlooked aspects of the human condition - the desire to find meaning and the need to be wanted. Roy meets a “Star Wars” selection of characters, ranging from the amiable to the downright wicked. These supporting role players are skillfully portrayed in their colorful diversity. The action unfolds at a logical but quickening pace, with an ending that deepens the mystery surrounding Roy. Subtitled “The most chaotic midlife crisis in cosmic history,” Roy will appeal to those with a sense of the bizarre. “The Incident” is particularly amusing. There are subtle comparisons with life on earth. The differences in culture, race, class, and rich versus poor will be familiar themes. Roy appealed to my off-beat sense of humor! This book is the product of a vivid imagination and is an entertaining read.