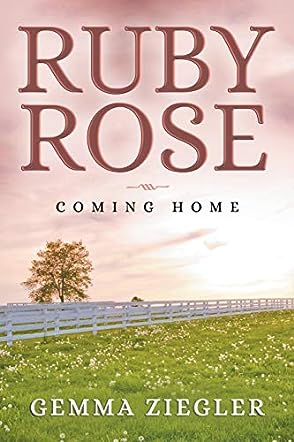 When Gemma Ziegler's Ruby Rose: Coming Home begins, we meet Ruby Rose Russo traveling to her childhood home in rural Cornishville, Kentucky, a move necessitated by the loss of her husband and their wealth in the stock market crash. Returning home isn't exactly a pleasant prospect for Ruby Rose. Her parents have passed on, her best friend has moved away, and her happy childhood memories are difficult to recall due to a trauma she suffered at age thirteen. A vastly different lifestyle awaits her at the farm, but Ruby Rose is determined to make it simply because she has no other choice. She finds help and companionship in a young wanderer named Luke, and in the children of a downtrodden woman named Echo, who have squatted on her property. In Echo, Ruby is given the opportunity to help a young woman with whom she has much in common. In these new friendships, Ruby Rose finds the courage to confront a terrible trauma from her past and uses it to see justice done for herself and others.

I enjoyed Ruby Rose—the character and the novel. Ruby is the quintessential Southern woman—strong, feisty, and not willing to give up without a fight. She gained strength with every page, even when she was forced to deal with the event that made her leave home all those years before. It was a joy to see Ruby devise ways of surviving and then thriving in her new, old life. She relearns how to garden, how to make lace, and how to revive a forgotten vineyard. Ruby Rose is an entrepreneur at heart, but she's not after money. In a way, she's aiming to fight back against who and what traumatized her, and to lay claim to what was taken from her. I loved the way Ruby saw what she needed and grabbed it--whether that was an opportunity to help a young woman, see justice done, or find love again. Ms. Ziegler’s novel has wonderfully interesting and well-developed characters, and the relationships between them are palpable and real. The novel also features a penetrating and realistic setting—from the workings of the farm and vineyard to The Powder Box beauty parlor in town. The ending, while somewhat abrupt, was satisfying and left me wanting more. Recommended.