by Marcha Fox and Pete Risingsun The Casebook of Qing and Xmucane Return to the Absolute Running with the Wolves 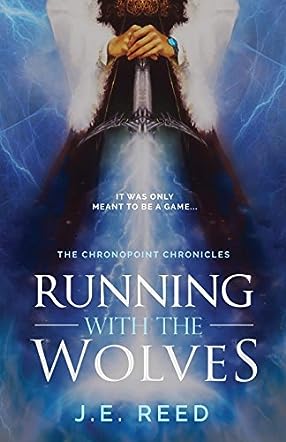 J.E. Reed lives in Cincinnati, Ohio with her husband and two cats. She’s always had an interest in writing, but didn’t explore that talent fully until 2015. Reed works as a Licensed Massage Therapist in the quiet town of Anderson. She graduated massage school in 2009 and has spent the last three years building her small business. She enjoys swimming, yoga and the occasional mud run with friends.

Running with the Wolves by J.E. Reed is book one in the author's new series, The Chronopoint Chronicles. After years of shaping and molding a team in an international multiplayer game called Chronopoint, Kiuno wakes to finds herself in the middle of an unknown forest with a wristband and a case of transitory amnesia. Armed with an instinctive - even if inexplicable - skill set, it isn't long before Kiuno realizes she's been thrust into a fantasy world she'd dedicated two years toward navigating. Except this Chronopoint isn't just a game. Left without any alternative, Kiuno is forced to embark on a journey - filled with danger, deception, and sorcery - in an attempt to locate the rest of her Chronopoint alliance. Failure to do so will doubtless result in death...not only in the world she finds herself trapped in, but in a reality of which she can no longer be certain.

Running with the Wolves by J.E. Reed is a quickly engrossing story with the type of strong female lead readers look for (and rarely find) in the books we read today. Kiuno is tough, intelligent, and capable in a narrative that will endear readers to her immediately; a well crafted and layered multidimensional protagonist in a multiplayer environment. The plot is unique and wholly singular: a marriage of almost prehistoric survival and modern technology. If Ready Player One and The Hunger Games had a love child, this would be it. I'm excited to see where book two leads and would recommend Running with the Wolves to readers hungry for a fresh new voice in the fantasy genre.

Kiuno wakes up in a forest with no memory of how she got there. Even her memories of who she is are fuzzy, but she knows that the name carved into the stone on her wrist is hers. She sets out in search of civilisation and answers, finding neither in the village at the edge of the forest. The people here are starving and desperate. They are afraid to venture too far past the stone wall surrounding the village. Here, Kiuno befriends Elliot and Kikyu. When a group of men rides into town one day, they discover that everyone is trapped in an online game called Chronopoint. To escape the game, they must travel to the last realm, but getting there won’t be easy. Bandits plague the roads while terrifying creatures stalk the wilderness. And Kiuno won’t leave until she finds the friends and family whom she played with in the real world. She only hopes she’ll find them alive and not in a graveyard.

Running with the Wolves is a highly readable introduction to J.E. Reed’s Chronopoint Chronicles. Although there are moments where Kiuno makes stereotypical choices by following her heart as opposed to choosing a wiser course of action, J.E. Reed uses this to develop internal conflict in Kiuno. This ultimately turns her into a more complex and relatable character, even if she isn’t as likeable as secondary characters like Elliot and Kikyu. Reed introduces a subtle commentary on human nature through the actions of desperate people stuck inside Chronopoint, as well as those who take advantage of the lack of law and order to behave despicably.

Running with the Wolves by J.E. Reed is the first book in the Chronopoint Chronicles and it’s a great achievement for an opening entry in the series. Kiuno wakes up in the middle of nowhere, in the wilds, and the first thought that crosses her mind is that of having been abducted? But who would even want to abduct an online gamer? Then the truth hits home as she remembers her surrogate name, Kiuno. It has been two years since she started playing the game and building alliances across the globe, and while she thought this was just a game, some monster had watched her and made sinister plans. Now she is trapped in a strange place and must fight to survive. But she isn’t the only one thrown into this dangerous world with monsters. Follow Kiuno on a very perilous mission to locate those from her alliance, while trying to fight monsters bent on destroying them.

Here is a book that will appeal to fans of The Maze Runner and The Hunger Games. Once again, an author creates a compelling read modeled around a deadly game. Readers will love to follow the protagonist who wakes up disoriented in a strange realm and who has to figure out what happened to her, seek those in her alliance, and overcome insurmountable challenges. The question that nags one’s mind is: What happens in the end? The grittiness gives the story a singular quality and beauty, allowing the characters to measure their strengths and build themselves as they face new challenges. There is a sweetness in the language that grabbed my attention from the very first page, and the poetic character of the narrative is an element that readers can’t miss. Running with the Wolves is fast-paced and the conflict is phenomenal. You will get emotionally rattled, even at times annoyed, as you follow these memorable characters. J.E. Reed has just proven that she is a great storyteller. She has what it takes to keep readers excited from the first to the last page. This is a book laced with intense action and emotionally charged scenes.

Nothing could have ever prepared her for what was about to happen, because even she doesn’t really know what’s happening. All she knows is that her name is not Kiuno, no matter what it may say on her bracelet, and there’s an entire life she’s left behind somewhere out there. But the world is now something entirely different from what she remembers and all that she can do is try to make friends and allies, try to survive in a world that’s more dangerous than anyone could imagine, and try to cope with what she’s leaving behind as she goes on, because it’s the only way she’s ever going to find the ones she loves in Running with the Wolves by J.E. Reed.

This book is full of a lot of adventure, action and danger around every corner. Kiuno is an interesting character that you want to find out more about and you want to see get what she’s looking for, but there are other characters as well that you want to see achieve success. You never know what could happen next and you don’t know just what is going to happen to Kiuno, Elliot, Kikyo, Liam, Vincent, Maltack, Elite and all the rest. In Running with the Wolves, you’ll be looking for danger at every turn of the page, and hoping that the next one you lose isn’t going to be someone you care about, because Kiuno is definitely hoping the same thing. There’s no telling who will make it out of this alive, or if any of them will.

Chronopoint was only meant to be a harmless online game, but in Running with the Wolves by J.E. Reed, Kiuno, the heroine, finds herself in the world that should not be real. She wakes up without knowledge of her real name. A bracelet shows only the name she is known by in the game Chronopoint. She used to be the leader of an alliance and had made friends all over the world. Her husband, who went by the name Elite, was also part of the game. But when Kiuno wakes up, she finds herself alone and confused. Soon she finds other people, but nobody really knows why and how they ended up in the world of a game they all used to play. Something else is different, too: some people are able to wield elemental magic, and some are able to heal others. Kiuno's powers, however, seem to be different and sought after. She manages to find some allies she used to know from the game, but Elite remains missing. The little group decides to move towards the front where an exit might exist. But the realms of Chronopoint are full of dangers, and not all players have peaceful solutions in mind.

I love the idea of being drawn into a game you play (I'd love to live in Spira or some of the countries in the Elder Scrolls series!), so I picked up Running with the Wolves by J.E. Reed. While Chronopoint does not sound like the game I'd play, it was still a very exciting novel. After all, the plot isn't about the game play but the world the game is set in. Kiuno is an interesting main character, but makes some dumb decisions. However, the whole book would be boring if everything was straightforward and everyone was perfect. Just like Scorpios, one of her allies, I sometimes would have liked to give Kiuno a piece of my mind! I enjoyed the journey, but also know that Kiuno has not yet arrived where she needs to be. Her powers are intriguing, and a mystery yet to be solved. There is plenty of material left for the sequel, and if the author doesn't change much, then it'll be another exciting read! I'd definitely recommend this book to people who either like gaming or fantasy novels - or both!