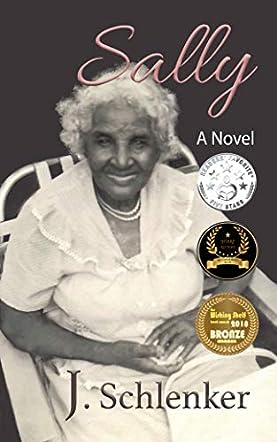 J. Schlenker, a late blooming author, lives with her husband out in the splendid center of nowhere in the Kentucky foothills of Appalachia where the only thing to disturb her writing is croaking frogs and the occasional sounds of hay being cut in the fields.

Her first novel, Jessica Lost Her Wobble, published in December 2015, was selected as a finalist in the William Faulkner - William Wisdom Creative Writing Competition and was awarded five stars from Readers’ Favorite. One of her short stories, The Missing Butler, received honorable mention in the first round of the NYC Competition. Her second novel, The Color of Cold and Ice, received an IndiBRAG Medallion. The Missing Butler and Other Life Mysteries (A Collection of Short Stories) and Sally, A Novel, both received five stars from Readers’ Favorites.

Sally: A Novel is the fictional account of the life of Sally Ann Barnes (1858 - 1969), a black woman born into slavery in Kentucky. Author J. Schlenker met Sally briefly as a child, when Sally was over one hundred years old. Her memory of that meeting later inspired Schlenker to research Sally’s life. An introduction and an afterword discuss what is factually known, including several photographs and other documents. In the fictional account, which Schlenker tells by interweaving points of view from characters in three separate timelines, she incorporates those facts into a fascinating tale of endurance, forgiveness, and discovery. The result is a complex tapestry that spans several generations of black, white, and mixed-race families, with Sally at its heart.

On the one hand, Sally: A Novel is disturbing, as it addresses the harsh and inhumane conditions faced by enslaved Americans, especially women, as well as the deep-seated racism that no war or law could end with the proverbial snap of a finger. On the other hand, this is a deeply engaging story. Schlenker writes in flowing, descriptive, and emotionally evocative prose. The main characters are well-developed and relatable. It’s a story that will make you think twice about the so-called ordinary lives of ordinary people. It may also inspire the reader to research the lives of his or her own ancestors, especially if there are elderly family members still living who may know something of their stories; or to keep a journal for the benefit of descendants. Highly recommended.