How to Become an Ambassador The Story of my Life 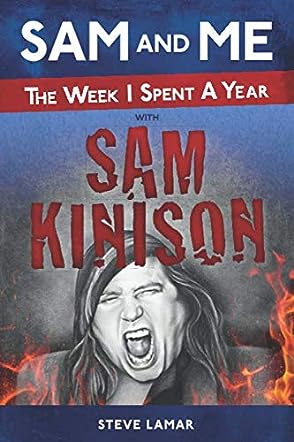 SAM and ME tells the true story of Steve's less-than-modest small town Texas
childhood, his escape to Hollywood at the age of seventeen, and the crazy week he spent with comedian, Sam Kinison, after discovering him at The Comedy Store in Los Angeles before he became a comic legend. Written in a conversational tone with humor and honesty, SAM and ME is a must read for any fan of Sam’s, or any fan of stand-up comedy. Lamar said, “Discovering and working with Sam was one of the highlights of my television career. Being in a room with just me, Sam Kinison and Robin Williams – that was one of the highlights of my life, even though Robin thought I was going to kill him.”

SAM and ME: The Week I Spent A Year With Sam Kinison is a nonfiction music/entertainment memoir written by Steve Lamar. As Lamar was growing up, he soon came to the realization that he wanted to be in show business. He was the youngest of six children born into a poor family living in a small town in Texas, but his sister’s record collection and the television shows he grew up with convinced him that he belonged in Hollywood. Lamar wasn’t aspiring to be an actor or singer; he wasn’t convinced he had the talent to be either of those, but he did feel he could make it as a producer or director, based on what he read in the TV Guide each week. When he was seventeen years old, he left Texas for the bright lights of Hollywood, driving his newly purchased Mercury Montego and armed with the address of his former employer’s sister, who lived in LA and would let him stay with her until he found a place to live. And somehow, with a lot of hard work and some marvelous and unforgettable friends and mentors, Lamar made it.

Steve Lamar’s nonfiction music/entertainment memoir, SAM and ME: The Week I Spent A Year With Sam Kinison, is prefaced with an introduction wherein the author wonders if he just wrote a run-on sentence and explains that he’s a producer, not a writer. Judging from the Grammys and other awards he’s won, and from the quality of this most entertaining memoir, I would have to beg to differ and say that he’s pretty well proven that he is both. Lamar is disarming in his candid reminiscences of his childhood, sharing both the uninspiring hometowns and the excitement that '70s television brought into his life. His story unrolls so smoothly that I started to slow down my reading speed to make the experience last as long as I could. Yes, he does meet Sam Kinison; he even discovers him, and spends a hectic week babysitting the mercurial comedian (which had me remembering the classic 1982 comedy, My Favorite Year, and wondering if life really did imitate art). And his stories about stunt school are marvelous. I’m hoping this talented, interesting and very funny man decides to put more memories down on paper, or even perhaps a fictional work of his own. A voice this enthralling deserves more. SAM and ME: The Week I Spent A Year With Sam Kinison is most highly recommended.