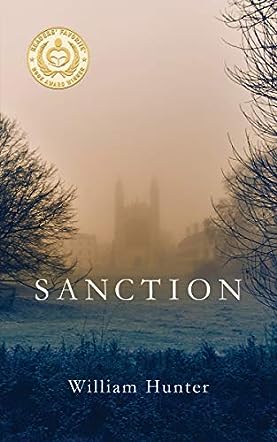 In Sanction, William Hunter sets his crime thriller in the United Kingdom. Sean Garrett is on an unofficial mission there when he witnesses the murder of a reputable Cambridge professor by a well-known contract killer, David Laurent. His cover is blown and he has to get as far as possible from a killer who wants to leave no traces behind. The head of the Secret Intelligence Service is trying to find out if there is a connection between the murder of the professor and a bombing that took place a year earlier. While CIA operatives Tre Ward and Brian Bishop are on a desperate mission to locate and extract Garrett, Montjoy, the head of the SIS, makes a discovery that will blow the minds of readers, a dangerous secret that has been buried since WWII.

William Hunter introduces readers to an array of characters, each with a solid background and depth of personality. The writing has great emotional resonance, semantic richness, and essential depth. I love stories that are well-plotted and Sanction never disappointed. Right from the very first page, the reader is already enticed by the elements of suspense that define the pulse of the story. This one is a veritable tour de force and Hunter reveals himself as a master of the craft, one whose name should appear alongside the likes of James Patterson and Lee Child. The story is intelligently constructed and the execution is faultless, a gripping plot with swift turns that will grip the reader.