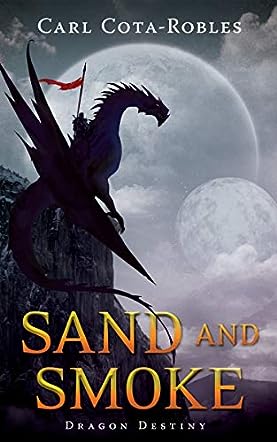 Sand and Smoke by Carl Cota-Robles is the first book in the Dragon Destiny series. Maya’s dream is to attend a Serpentine school and to bond with a Sun Dragon of her very own. When she receives news of her acceptance, it’s only the first step. Now she must complete a series of trials before she becomes an official Serpentine. Maya has a secret. One that could cost her everything that she’s dreamed of and could put everything she’s worked for at risk. With a partner that refuses to do any work, Maya must do everything she can to make it into the school. Elsewhere, across the lands rides a great hero known as the Silver Bandana. Young Al took up the mantle of a hero with his only goal being to help those in need, but after he receives a mysterious message from a Northman, he discovers a dangerous weapon with the power to destroy everything. To top it off, a bounty hunter is hot on his heels and he knows the man’s reputation well. He won’t stop until he catches Al.

The story weaves between the two perspectives of Maya and Al with Carl Cota-Robles building two separate journeys until syncing them together at the end. Al lost his mother and, as a result, he was driven to become the Silver Bandana so he can help people. He has a Zorro-like persona and a horse with a lot of personality, which makes for a delightful duo as they go from town to town. The other half of the story follows Maya. Maya’s path crosses with Al’s when she discovers a dangerous secret which brings the two journeys together for an exciting conclusion. The world Cota-Robles has created is a fascinating and incredible place full of dragons and magic, secrets and danger. The story contains intermissions throughout that follow the perspectives of dragons as they face their own struggles through scenes that provide a key role in how the action unfolds. Sand and Smoke is a delightful fantasy adventure that has action-packed moments, danger and suspense, humor, and two interwoven coming of age journeys.