Sasha Savvy Starts It Up 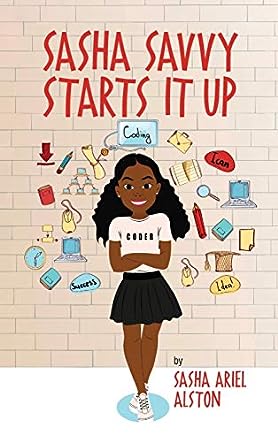 Sasha Ariel Alston is the author of the groundbreaking children's book, Sasha Savvy Loves to Code. Sasha Savvy Starts it Up is the second book in the series with a focus on entrepreneurship. Sasha is a well sought-after Speaker that encourages youth to explore educational and career opportunities in STEM. She has appeared on Good Morning America and C-SPAN Book TV and been featured in Forbes, Huff Post, the Atlantic, and Black Enterprise. She has inspired girls to dream big in Disney, Google, Snapchat, Amazon, & Facebook initiatives and won several awards for her outstanding accomplishments. A 2020 graduate of Pace University's Lubin School of Business with a degree in Information Systems, she is also the Founder & CEO of Sasha Ariel Ventures LLC. Currently she resides in Washington, DC.

Sasha Savvy Starts It Up is an educational novel for middle-schoolers and preteens written by Sasha Ariel Alston. Sasha’s excitement over starting the new school year as a sixth-grader became even more intense when her mom announced there was going to be a hackathon at American University that Friday evening. She thought Sasha and her older brother, Savion, might want to attend. Her mom agreed that Sasha’s best friends, Gabby and Ashley, could attend as well, and she would make all the arrangements. The possibility of the hackathon including coding challenges made it especially appealing to Sasha. She had learned to code in camp during the summer and loved it. Friday soon arrived, and the three girls, accompanied by Sasha’s brother, made their way to the university. At first, the girls were a bit taken aback to see there were no other girls signing up, but soon others arrived, and they felt more at ease. As Carla Thomas, the event speaker, began the program by introducing herself, the four of them listened closely. They felt privileged to be there as she congratulated first-timers for joining this hackathon. Soon, they received the guidelines for their project, and the event was in full swing.

Sasha Ariel Alston’s Sasha Savvy Starts It Up introduces middle-graders to STEM and STEAM, and shares what going to a hackathon is all about. I loved seeing as Sasha, her friends and her brother decide upon a project and start implementing its design and strategies. This book is especially valuable for getting girls on board with taking science, math, and technology courses and acknowledging how women have contributed greatly in those fields. I appreciated how Alston includes the arts in the story, both as a way to introduce STEAM rather than STEM and as the subject of one of the projects offered by one of the competing hackathon teams. Alston’s story is fun and informative, and her characters feel real. Sasha Savvy Starts It Up is most highly recommended.