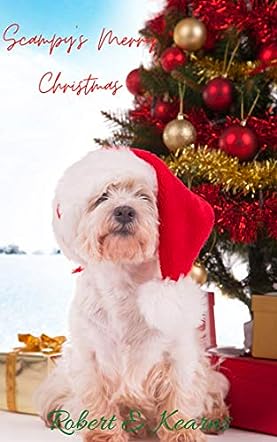 Kearns has since penned the books Crabb and Carnivore.

In addition, he's written The Book of Mostly Gibberish (With Some Good Stuff Too), Poems & Short Stories Vol.1 and Vol.2 and Words of a Feather.

Robert lives and writes in Dublin.

Scampy is a bundle of love and energy from the day he is born. He loves to run and get into mischief, but he’s so happy all the time, a happiness that is contagious, that he is quickly forgiven. Animals and humans on the farm all love Scampy. But Farmer Jones can’t keep the new puppies. Once they’re old enough, he starts giving them away, hoping the families that adopt the puppies are good families. Scampy is one of the last to be adopted. The man who comes to take him away fools Farmer Jones into thinking he’ll care for Scampy. But the animals on the farm know better. They’re good judges of human character. Unfortunately, Scampy is taken away to a not-so-nice new home in the city, with no place to run and be a happy puppy. The first chance he gets, Scampy runs away, hoping to find his way home, or at least into a happier home where he’ll be loved.

So many pets are abused, abandoned, poorly cared for. It’s a tragedy and we need more stories like Robert E. Kearns’ Scampy’s Merry Christmas to help us be more compassionate and caring for our animal friends. The story is basically a narrative, told with care and sensitivity, drawing the reader into the life of a young puppy, first on the farm where he was born, then in the grim living conditions in the city. The plot starts with a happy little puppy, develops into a sad, almost tragic situation, and then reaches its climax with an exciting escape that gives readers, and Scampy, of course, renewed hope, leading to a satisfying resolution. There is some dialogue, mainly amongst the animals, but the story is mostly told in narrative form. Scampy’s story will certainly touch the hearts of animal lovers.

This story warmed our hearts and brought a tear to my eye. We got carried away with the excitement and fear of Scampy's terrifying journey. My daughters can't wait wait for Scampy's next adventure.! C'mon Robert E Kearns, write the sequel!!