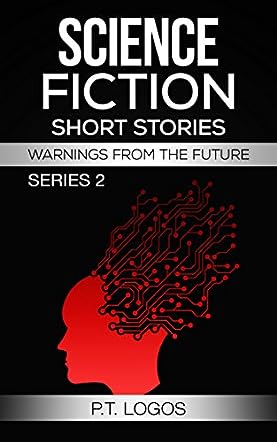 I fell upon this world with a head full of crazy stories.

From a very young age, I would love telling and hearing stories. Construction of stories is, after all, such an intrinsic part of being human. Everything we hear is part of a story. Whether it is a true story or not depends entirely upon our beliefs. Either way--they are still stories.

I currently work in Mental Health field so you'll see that topic come up at times in my writing. I'm also fascinated with all things tech-related. I enjoy attempting to peer into the future and make educated guesses and predictions about what we'll see happen 10, 20, 30 years from now (and beyond sometimes).

Science Fiction Short Stories, Warnings from the Future, Series 2 is a collection of futuristic science fiction stories written by P. T. Logos. The story 2121 tells of the planet Terra 7, a far cry from the idealistic vision so many had of a pioneering life spent among the far-flung stars. Terra 7 is inhabited, or barely inhabited, in truth, by the deformed and badly burned survivors of the PQ9 spraying, which had destroyed the virus laying waste to the inhabitants, but, in the process, had contaminated the planet and hideously disfigured and maimed those who lived on its surface. Even the lucky ones who were sheltered from direct contact with the spray had lungs injured by the PQ9 fumes, which still persisted in the atmosphere. Terra 7 was the planet least likely to attract tourism, especially the area known as Barren Lands where Jimmy had his bar and spent his life serving the locals. He was surprised to see a new face come in that day. The man was dressed in clothing that had long since lost its original coloring, and the deeply lined face betrayed his age. Jimmy began to feel some concern when the man continued to toss back the beers Jimmy kept bringing him. His mildly put request for the tab to be settled was rudely rebuffed. The man claimed someone would be by to settle the mounting bill. And someone did come by -- she was stunning, made even more so by the brutal contrast of her appearance in those surroundings. The stranger complained to her about his long wait and demanded assurances he'd be compensated for his services. Her response was even more stunning.

P. T. Logos' collection of futuristic science fiction stories, Science Fiction Short Stories, Warnings from the Future, Series 2, is a wry and darkly unsettling look at a future that is even more bleak than the present. All the mistakes made on this planet seem magnified and enhanced with the convenience of distance making planetary catastrophes trivialities to be swept, as it were, under the carpet. I was surprised by the darkness of this collection; it was a far cry from the idealistic vision of the classic hard science fiction novels of the twentieth century and the Prime Directives of television science fiction space operas. What makes these stories work so well, however, is the humanity that seems to survive despite the burning rains, brutal winds and stunningly swift destruction. I was most taken by the Virtual Reality sequences, especially those which occur in 2121, the chapter entitled Run, where Marian and Jacob, two observers on a Top Secret monitoring ship, create their own version of paradise, complete with oceanic waves, palm trees and the sounds of tropical birds. Science Fiction Short Stories, Warnings from the Future, Series 2 is a thought-provoking and sober look at mankind and its unfortunate propensity for damage and destruction. It's highly recommended for those who enjoy their science fiction on the dark side.