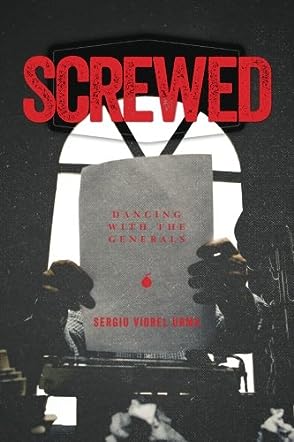 Sergiu Viorel Urma was born in Romania, where he earned an MA in English language and literature. After a two-year stint as a reporter for the state-run Radio Bucharest, he joined the Associated Press, first as an assistant and then as a correspondent from 1974 to 1987. After he was forced to leave the country by Romania's communist authorities, he worked in Vienna, Austria, as an AP reporter covering Eastern Europe and the anticommunist revolutions occurring there. Since arriving in the United States in 1990, he worked on AP's International Desk in New York as a reporter and financial editor until 2014, when he retired after 40 years with then company.
Urma is married and living in New Jersey. "Screwed" is his first book. His play, Chessgame, was published in 1996 by Modern International Drama, a magazine of contemporary international drama issued by Binghamton University, State University of New York.

Screwed: Dancing with the Generals by Sergiu Viorel Urma is a historical memoir, an autobiography of Urma, a reporter for The Associated Press news agency in Communist Romania. Urma spent forty years as an Associated Press reporter in Romania, Eastern Europe, and in the US. The book starts with Urma sitting in the reading room of the National Council for the Study of the Securitate Archives in Bucharest. As he looks over the now-public dossier of his movements — the secret police files — recorded by Communist Romania's Department of State Security, the secret police agency of Communist Romania, we catapult into Urma's tale on the subversive relationships, political pandering, torture, and all the trappings of a heavy-handed marriage between the Communist machine and the press.

Sergiu Viorel Urma has written a tense memoir with Screwed: Dancing with the Generals, and he doesn't hold back in his revelations of the first-hand facts presented in his harrowing autobiography. At about 200 pages in the hands of a prolific reader, I should have been able to finish this book in a single sitting. Not so with Screwed. Urma has provided a trove of information so extensive and disturbing that I was forced to set it down after consuming only a handful of pages, and it ultimately took me a week and a half to finish. This had nothing to do with the writing itself; on the contrary, the subject matter is effectively conveyed in a believable, well written script, and so intense that it was impossible to process in a short span of time. This little book packs a whopper of a punch, and I strongly recommend it to anyone with interests in ambitious and inspiring stories of professional integrity and personal survival.

This is one of those non-fiction books that reads like fiction but, unfortunately, isn't. It's the first-person story of the author, Segiu Viorel Urma, a correspondent for the Associated Press in Romania (the only correspondent for many years), reconstructing the secret war against him and his fellow Romanians before the fall of the Soviet Union and Romania itself. From the title, Screwed, you can tell Urma isn't one to hold anything back. Using his own secret files, finally revealed to him, he traces Romania's history from the '60s, when Nixon and Ceausescu were good buddies, through to the present. (Ironically, Nixon the Cold Warrior is still far more popular in China and in Romania than he ever was in the United States.) During his 14 years as an Associated Press reporter in Bucharest, Urma played a cat and mouse game with the Securitate, Romania's secret police. Although the reporter agreed to talk to them from time to time, the authorities (correctly) believed his heart wasn't in it. Their suspicions were well documented and Urma shows the State's earnest confusion as to what to do with an honest reporter who couldn't be controlled. "The totalitarian system treated reporters like criminals," the author explains, and proves it. The Romanian version of totalitarianism often seemed silly, like a Marx Brothers movie, as when in 1982 they banned Transcendental Meditation along with any other "Hindu spiritual discipline." Or when all typewriters had to be "registered," with samples of typing submitted, so any leaflets or, in fact, any typed material, could be traced nationwide.

"Machiavelli, the father of realpolitik, was a sucker compared to the great intriguers and conspirators of communism," Segui Viorel Urma writes in his memoir, Screwed (Dancing with the Generals). It's a fascinating journey back to the Cold War and a unique glimpse behind the Iron Curtain. I give it five stars as primary source journalism and would highly recommend it with the proviso that the reader be interested and have some knowledge of the period and the issues of that period. As a first-hand account, the book both benefits and suffers from that narrow vision - you'll need to have some background to follow the history here. That said, the official reports on Urma's activities by the Romanian authorities is incredibly valuable material on how the regime worked, attempted to control its citizens, and limited information that left the country. The basic tactic was fear, and the author describes nicely what it was like to be constantly under surveillance of one kind or another.

Urma left Romania in 1987 and has been living in the US and working for the AP since, so he has some very American-sounding opinions on the international situation today. He also laments changes in journalism, which I'm more inclined to agree with. These personal opinions take up only a small portion of the end of the book, and don't detract from a terrific read.

I like the title of this book. Short, sweet, and straight to the point. And take the word of an old soldier, when you dance with generals, screwed is exactly what will happen to you. This is an important story. Granted, it's a small part of a much larger picture, but that doesn't make it any less important. Sergiu Viorel Urma was there. He lived through a dangerous and crazy time in world and Romanian history and his story deserves to be told. Mr. Urma has the sure factual style of a reporter, but also a gift for showing the irony and sheer folly of the situation.

I know nothing about Romania. I've never been there. But I want to tell you why Screwed: Dancing with the Generals struck such a powerful chord in me. I am working and living in mainland China, the last great bastion of communism in the world, and the system and situations eerily resemble many of those in Screwed. As I read Screwed, I wondered why communism creates such crazy systems. I think I found the answer on page 3 of this book. "I often asked myself what the incentives are to succeed in a totalitarian system: The ambition to control other people and be feared by them? The belief that you're smarter and deserve better? The art of survival?" I think totalitarian systems bring out these kind of people and Screwed should be read by anyone who is tempted to think that such a system can actually be a good thing.