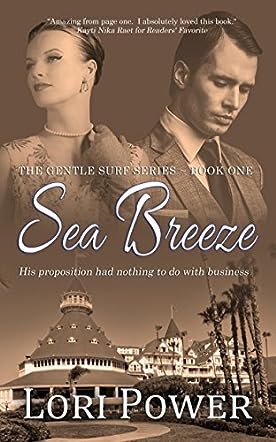 Sea Breeze: The Gentle Surf Series, Book 1 is an historical romance novel written by Lori Power. Elleah Jaundoo thought she had created enough distance between herself and her society family by moving across the country and getting a position as a jazz singer at the Hotel Del Coronado in Southern California. Ever since her mother died, her father seemed to have changed, and he had become obsessed with quickly marrying her off to a suitable member of New York society. When she saw her brother had tracked her down, Elleah was both incensed at Arthur and worried that her father would be coming after her next. Arthur's assurances that he had come alone didn't help, however, and his evident anger at her use of her mother's maiden name instead of her father's, Mellon, reminded her of their childhood skirmishes, but didn’t change her mind. She would stay strong now; she had to. Elleah was determined to make it on her own, to be an independent woman. As they argued in her hotel room, the tension gathered and grew until he finally gave in. As he stood by the door, he turned and kissed her brow. Elleah watched as he walked away; then she noticed the man standing in the doorway of the room opposite hers. Thinking her a woman of the night, he lifted his glass to her and smirked, his eyes travelling down the dressing gown she wore. Elleah turned away and closed her door, her thoughts troubled by Arthur's sudden appearance, heedless of the judging glance of her neighbor.

Lori Power's historical romance, Sea Breeze: The Gentle Surf Series, Book 1, is a marvelous blend of mixed messages and tangled identities as two star-crossed lovers fall in love despite their families' histories of cut-throat competition in the banking world. Set in the early 1950s, Elleah's act of defiance in leaving home and setting up on her own was a daring thing indeed, particularly among the powerful families of East Coast society. It was far too easy for a domineering parent to have a wayward daughter locked away in a mental institution -- as had happened with Reginald's sister after the scandal of her affair with a married man. This beautifully written story is filled with strains of soft jazz singing mingling with luscious images of warm Southern California evenings on the beach and the island charms of Trinidad where Elleah's mother was born and she comes to heal. Sea Breeze is a sweet romance, with two marvelous main characters, that feels like one for the ages; it's that good. Sea Breeze: The Gentle Surf Series, Book 1 is most highly recommended.

The life of the rich and privileged has its drawbacks, and when Elleah Mellon insists that she be known by her mother’s name of Jaundoo, her father is outraged by what he views as a betrayal. He needs Elleah to behave in the manner in which she was raised, honoring the family values and social responsibilities of her status. That is not in Elleah’s plans. She will not be “sold” to the highest bidder for the sake of making a logical business deal - and she will not give up her personal passion as a performance artist, even if that means throwing away her independence. So, she goes incognito to follow her dream. When Elleah secures a part-time position as a lounge singer at a lush island resort, she is at peace for the first since her mother’s death. That is, until he shows up. Reginald Cavanaugh: wealthy, handsome, and desperate to release himself from his own father’s plans for a business-deal marriage. While Elleah and Reginald work at hiding their true identities, love has its own plan.

Sea Breeze: Book 1 in the Gentle Surf series by Lori Power is a delightful, light-hearted romance that will assuredly fill the reader with only good thoughts. As a romance, I find Power’s novel a welcome escape from popular promiscuity that often leaves the reader with conflicting emotions. Sea Breeze is the perfect story for a beach read or weekend escape. There are no compromising sexual or suggestive passages, making this an easy and relaxed read. I enjoyed the story very much.

Sea Breeze (Book 1 in the Gentle Surf series) by Lori Power is a contemporary romance with both adventure and humor mixed in. Sea Breeze would appeal most to an audience of adults who enjoy fast paced romance with a bit of adventure. Sea Breeze takes place on the island of Coronado and follows Elleah Jaundoo (Mellon) and Reginald as they both try to figure out the future that they want for themselves, and whether or not that future involves both of them. What could be a simple romance instead becomes complicated as Reginald is expected to marry a different woman and Elleah is unsure if she truly wants Reginald.

Sea Breeze by Lori Power was a unique romance that reminded me a bit of a more modern Romeo and Juliet with how Elleah and Reginald are both from rival banking families. I found Sea Breeze to be much more enjoyable than Romeo and Juliet, though, as it truly sets itself apart from other romances by keeping the rival nature of the two families a secret from Reginald. I found it interesting that Elleah took on a different name so that she could be a singer at the Hotel Del Coronado. Elleah was my favorite character because I felt like I could understand her the most, and I sympathized with her indecision in regards to Reginald. I look forward to reading the second book in the Gentle Surf series!

Elleah is attempting to get away from the pressures of her family when she travels across the entire country to find her own way. But living her own life is going to be more difficult than she may have thought, especially when Reginald shows up out of the blue, making a mess of all her carefully laid plans. But is there something else about him that she just can’t seem to get away from. Is he the answer to all of her questions, or is he only going to lead her into a bigger mess? There’s no way to tell what’s coming next in Sea Breeze by Lori Power. After all, Elleah and Reginald have a whole lot they’ll have to sort out before they’ll be able to figure out if there’s even a future for them, or if they want it.

This first book in the Gentle Surf Series is definitely something you’re going to remember. It’s an interesting story and it’s really unique at the same time. The idea of a young woman who wants to leave behind everything that has hurt her and create a life for herself is a strong one. It’s something that anyone can relate to. Even more, there’s a strong male character to back it all up. I was impressed and would love to read more about these characters. I’ll be looking at books from this series too, because it really seems like a great background. Sea Breeze is a book that I’m going to remember and it’s one that I’ll read again.

Sea Breeze, Book 1 in the Gentle Surf series, written by Lori Power, takes the reader into the world of high finance, immense wealth and the unrealistic demands of two powerful families. Elleah Jaundoo ran from her cold, demanding family in an attempt to discover life on her own terms. Andrew Mellon, Elleah’s brother, is a social climber and does not understand his sister’s rejection of their family. Reginald Cavanagh is the son of another high ranking banking family; wealthy beyond imagining, but wanting more. His life has also been predetermined for him. He must marry for money. Declan, Reginald’s father, a man of means, heads a financial empire that he is determined to make even larger. It is a forgone conclusion that his son marries Catherine Burr to ensure the success of his anticipated world-wide empire. Lives change rapidly when Reginald catches sight and sound of Elleah, jazz singer extraordinaire, while staying at an elite hotel. The Mellons and the Cavanaghs have no time for the whims or personal wants of their offspring. Money is the name of the game and each is determined that a contract be signed and sealed, and theirs.

This is a passionate, romantic world of ambitious people, determined to advance their empires, regardless of the hopes and dreams of their children. The book presents the reader with powerful, ambitious, enigmatic characters living life to the full in a world of high finance and social climbing. This could be boring but it is far from that. Lori Powers has written a beautiful story, drawing the reader into the world of wealth, greed, power and love. The lives of Elleah, Reginald, Catherine and Andrew will never be the same again, and they each travel a rocky road trying to gain independence from parental expectations. It is an awesome story. Beautifully written, with very credible characters. Loved the story and the outcome. Highly recommended reading.