In the Heart of Autumn Joseph 3-in-1 Superhero A Surreal Trilogy When I Was Her Daughter A Song Was Playing 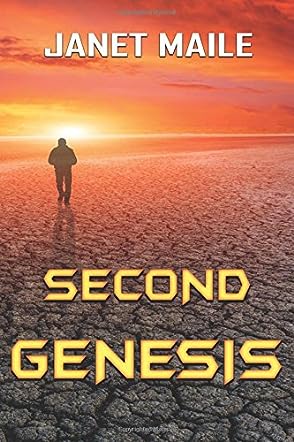 I started writing Second Genesis in the 1980s. I was inspired at the time by all the publicity surrounding cryonics - the freezing of dead bodies in the hope that at some future time they could be brought back to life and cured of their diseases. At that time, the Nordic Seed Bank began collecting and freezing seeds too. What would happen to all these frozen bodies when they were woken up at some future time, I wondered? I was concerned about climate change too and wanted to draw readers’ attention to the problems we might be storing up for ourselves.

On a simple level, the story of Second Genesis weaves around a group of people who are trying to save the earth from the greatest environmental disaster the world has ever seen. On a deeper level, Second Genesis is about the way we have lost our sense of being connected – to each other, to nature, to the universe and beyond.

The second part of the story, Final Illusion, will be published in October/November 2017.

I liked Second Genesis by Janet Maile. Science fiction is my first love. I will read almost anything, but I really love any good story about the future. I have read a lot of them, starting with the classics by people like Heinlein, Clark, and Asimov. Second Genesis is something of a post cataclysm tale. As I was reading about that first trip Outside, I was reminded of an astronaut leaving a space capsule. I was hooked from there. This is a tense world. I wouldn't want to live there, but I loved reading about it. There is a powerful message about issues and problems that we have political differences on now. We can’t even agree that there is a real problem, but Second Genesis tells us that there is. It also tells us that we had better fix these things.

The plot of Second Genesis is good and very believable for me. It all makes sense and Janet Maile tells the story in a compelling manner. The characters make total sense for that time and place. Gerald is portrayed brilliantly. The story starts off slowly, but the pace picked up and the suspense built at a faster and faster rate. The setting is a bigger part of this story than in many novels, and Janet Maile paints it well. An exotic setting, a tense series of events, and an exciting conclusion make Second Genesis a book that you won’t want to miss. It is well worth your time.