One Foot in the Grave, the Other Groping for Life 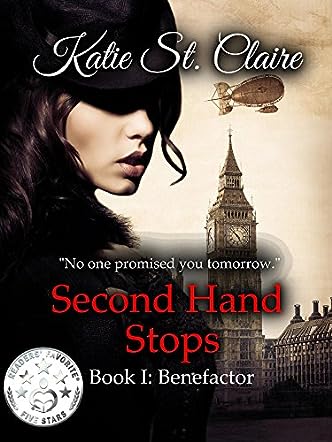 BIOGRAPHY:
As a published author, Katie St. Claire has been freelance writing since 2008, and writing fiction novels since 2013, when she published her first two books in the series as a beta run to determine interest. She has degrees in social work, psychology, sociology and human resources.

This allows her to develop characters with real human quirks, realistic dialogue, and thoughts & feelings we can all relate to. As a long time lover of paranormal romance and urban fantasy, she set out to write about something unique and fresh.

Although passionate about vampire books, movies, and television series, she wanted to concentrate on the paranormal as it relates to real human traits. As usual, she writes a few steps further and takes it into the realm of fantasy. Her goal was to make the series almost believable, bringing elements of science fiction and apocalyptic events into play.

Her extensive study of psychology and character disorders allowed her to write about sociopathic traits and behaviors associated with those behaviors. This coming of age series, with a paranormal twist, will have you wishing you were Julia or thanking God you’re not.

Katie St. Claire incorporates a little of herself into the characters, and writing, using both character traits she has, would love to have, or experienced with other people. Her plots are as vast and varied as her own imagination, which tends to get a little wild sometimes. She walks with the notion that nothing is impossible. This is Katie’s first Urban Fantasy/Paranormal Romance series, and she named it after the mysterious family of Van Burens.

In addition to writing novels we love, Katie is a hardcore gardener and chrysanthemum cross-breeder. She owes her extensive gardens to her imagination, constantly planting, re-planting, dividing and arranging in order to paint her world with living things.

Many of her passions appear in the books. And when she’s been a really good girl, her husband whisks her away somewhere tropical. The Caribbean is Katie’s utopia, and hopefully, her final destination.

Second Hand Stops by Katie St. Clair is the first book in the Van Buren Series. Left alone on a doorstep, Julia Malone is joined by several telepathic children to form a hotchpotch family of sorts under the watchful eye of the strange Mistress Lilliun. I have to admit, you are thrust right into the family right along with them. I could barely keep track of which person was which, but that definitely increased the level of confusion and chaos that would exist in the actual situation. Katie St. Claire has crafted such a fun character in the form of Julia. I'm quite impressed by her acerbic yet witty and still warm snark. She seems like the kind of girl I am on the inside, or at least the kind that I would very much like to be best friends with!

The setting is a blend of historical fiction and a mixture of New York and Old World Europe. It was fun to be in a book where traveling occurred as it would in real life, though many of the strange, paranormal, and telepathic happenings are very far from normal! It also occurred in small steps. You get glimpses of Julia and the others when they are young, snippets of when they are growing up, and then finally we settle in on one age for the remainder of the book. Doing this allowed us to get the whole picture of these kids and their background. Second Hand Stops is a fun and intriguing entry into this world...and I fully intend on coming back soon!