The Time Travels of Annie Sesstry 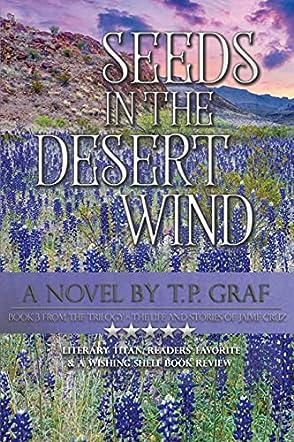 Seeds in the Desert Wind: A Novel by TP Graf is the powerful conclusion in the life and times of Jaime Cruz trilogy. Though it was a little sad to know it's the last book in the series, I was still eager to see what's been going on with Jaime. Yes, you'll eventually feel as though you're on a first-name basis with this character and the supporting characters as well. He's a character that you can hold up to yourself as a mirror, checking to see how you compare or contrast; a well-rounded figure who has developed realistically with character arcs and circumstances over the course of three books. This offering is about seeds of faith and hope being cast. As is the nature of seeds in a wind, some seeds will take hold and grow, while others never get the chance. Unsettling relationships are part of this book, and we have learned through Jaime that unresolved issues can gradually become like weeds, overtaking to the point of distraction and interference. He shows us a better way--a way that is about kindness, forgiveness, and restoration instead of bitterness. We can learn a lot from Jaime.

Graf again delivers interesting, full-bodied characters that we can relate to and want to follow through to their conclusions. I like how the author has shaped his characters over the trilogy and offered lessons and insights into their everyday, seemingly average lives. Their lives are average, but they are all stories too, and that seems to be the heart of the series. Each life has meaning, each choice has consequences, even the ones that seem random, well-intentioned, or thoughtless. The author's talent for setting, dialogue, and character-building shines in this finale, as we go with the protagonist on his journey of self-discovery. It opens with dangerous fires and then keeps growing in story and depth from there. The characters' sense of humor is still sprinkled in, which is a welcome feature, and, as in life in general, the subjects of politics, religion, and other social features pop up here and there. We also get a little inside information on ranching. The other characters are solidified in our minds as real people too, and there are some surprises that tie things together but still leave you thinking about the story after its close. If you're looking for a set of characters to connect with and a story that will entertain and move you, put Seeds in the Desert Wind: A Novel by TP Graf in your reading queue.