The Not So Secret Diary of a Pawnbroker In the House of Night Seven Exes Are Eight Too Many 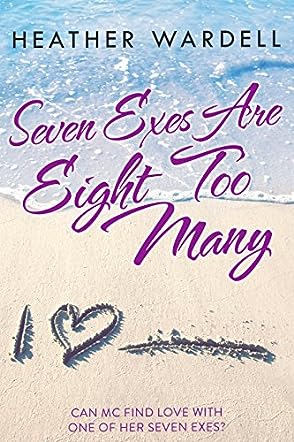 Heather is a natural 1200 wpm speed reader and the author of fifteen self-published novels including the free ebook "Life, Love, and a Polar Bear Tattoo" which has had over 375,000 downloads.

She came to writing after careers as a software developer and elementary school computer teacher and has no plans to leave it.

In her spare time, she reads, runs, swims, crochets, takes care of her aquarium and her cat Trinity, and plays drums and clarinet. Generally not all at once.

Seven Exes are Eight Too Many by Heather Wardell is the tale of MC and her stint on a reality TV show. Madeline Cora Spencer, better known as MC, is a very private person, but when she is pushed to one side by a good friend’s wife because she is unattached, she decides to apply for the TV dating show “Find your Prince”. When she arrives, dressed up to the nines to meet her new prince, she finds things are very different. Instead, she is dropped on a desert island for 21 days – with seven of her exes! To make matters worse, ex number 8 is dropped on another island with seven of his exes. Battle commences as both teams fight to win the prize of a million dollars and the results – well, you’ll have to read it to find out.

Seven Exes are Eight Too Many by Heather Wardell is chick lit at its best. This was another of those books I read from cover to cover as each chapter ended leaving me having to read on. The story line is straight out of Castaway but the results are both hilarious and touching. Lots of home truths and soul searching are done on the island and, although you have a pretty good idea of where the story is going, it was still a great read. A good book for a lazy afternoon by the pool or on the beach, and I guarantee any reader will finish it in one hit. Excellent story, I hope there is more where this came from.