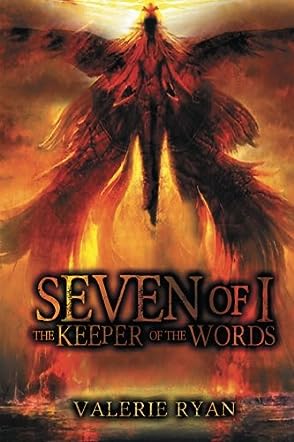 Valerie lived most of her life in Indiana and considers herself a Hoosier at heart, however, she now lives in the Tampa Bay area in Florida with her husband and two beautiful children. She has always worked with animals and has been a groomer, veterinary technician and dog trainer. She loves to write and cannot think of a time when she wasn't thinking of a story to share.

Fifteen-year-old Syntyche ‘Turkey’ Parks lives in a struggling post-apocalyptic world. Her unique ability to see guardian angels has left her an outcast, but little does she know that her gifts will soon expand with a blessing from the archangel Barachiel. She discovers that she is part of an old prophecy that must bring together angels, sins, and virtues to close the gates of Hell. In order to do this they must defeat each demon that guards the doors – all seven of them.

Seven of I: The Keeper of the Words by Valerie Ryan puts a fresh spin on the post-apocalyptic theme. The world building is intricate and ingenious. All the characters are well fleshed out and I love their quirky personas. Turkey is an easily lovable protagonist – witty, inquisitive and brave. That said, the storytelling style took some time to get used to. I was initially puzzled with the way some of the characters were ‘introduced’ to readers. Narrated through Turkey’s first person point of view, she would just say some names without telling who they are first and their relationship with her. All these details will only be revealed as the story progresses. Nevertheless, this was a minor flaw and didn’t prevent me from enjoying the story.

On the whole, Turkey’s adventure is a good read with its excellent world building and strong plot – mystery solving, working with angels and fighting demons, and not to mention the gryphon, phoenix and the dragon. It may seem ostensibly for younger readers, but others will enjoy this too.