It Shouldn’t Happen To A Microlight Pilot 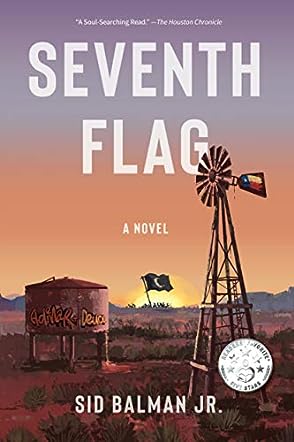 Seventh Flag: A Novel by Sid Balman Jr. tells the intertwining stories of two very different families on the prairies of West Texas. The author traces the journeys of three generations of a Syrian and American family to the small town of Dell City in West Texas. In the aftermath of 9/11 and the “war on terrorism,” we see how the radicalization of both Muslims and Christians has led to a rupturing of American society and the splintering of long-term relationships and friendships all across the country. The history of the Zarkan family can be traced right back to the 1850s when Ali Zarkan’s grandfather first arrived in America as part of a doomed experiment to introduce camels into the United States cavalry. When Jack Laws, an Irish/American immigrant, decided he needed to stake a place for himself after World War II, he chose the remote area of West Texas to farm. The Zarkan and Laws’ family bond was cemented following a bloody knife fight in a Mexican bar just across the border from Dell City. What follows is a tale of love, friendship, brotherhood and betrayal as these two immigrant families try to withstand the bigotry, religious intolerance and hatred that sweeps across America at the start of the new millennium. Their mutual love for football, their country, their Lone Star State, and ultimately each other will have to survive some extreme tests.

Seventh Flag carries a deep message of tolerance and love in a world that is severely wounded by its very antithesis. However, Balman pulls no punches in describing the turmoil that exists in both the two families as they try to balance their love for each other against the rising tide of hatred against Muslims and, indeed, immigrants of any color. This story is a reminder that ultimately all Americans are either immigrants themselves or descended from immigrants. Despite the powerful, overarching moral concepts of the novel, the author has managed to deliver an exciting, action-packed story of courage, selflessness, and duty that impresses. The writing style is extremely readable and I had trouble putting the book down, always wanting to know what would happen next.

The core of the plot revolves around the relationships of the children and grandchildren of Ali Zarkan and Jack Laws. The characters were strong and believable, especially with the pressures being put on them from all quarters. I particularly appreciated that the author chose to show the dangers of both sides of extremism, within both families. To me, what made this book stand out was the core belief that “we are all Americans” together in this battle against extremism, racial bigotry, and hate, in whatever form it may take. I finished reading with a feeling of satisfaction and completion and that’s possibly the highest compliment I can pay the author. I highly recommend this book.