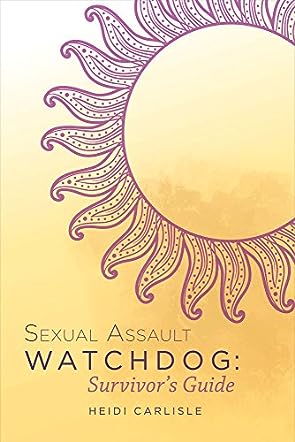 One of the hardest things for victims of sexual abuse and rape to do is to tell others about what happened. After the initial shock, most simply go silent, not knowing where to turn, who can be trusted, what help is available, and where and how to find it. By writing Sexual Assault Watchdog, Heidi Carlisle hopes to change those facts. And what are her qualifications to provide such information? Her most important one is the fact that she herself is three times a victim of sexual violence and knows the difficulties she faced in surviving the abuse, reporting it, dealing with police and the justice system, paying the financial costs of professional and other help, and the hundreds of other issues victims face, not the least of which is how to recover.

One of the best attributes of Sexual Assault Watchdog is its style: it is written in simple language that people of all social levels can understand. That’s important as victims of sexual abuse come from all walks of life, all levels of society, and both genders. Heidi Carlisle’s voice is clear, friendly, keen to help and encouraging. It’s also full of cautions, and those cautions are warranted: not everyone can be trusted; not all people are on the victim’s side; many victims aren’t believed; and far too many perpetrators go free. But Heidi Carlisle is not trying to frighten victims into even greater silence; on the contrary, she wants to alert all readers to the existence of a “rape culture”, a culture that abuses victims for the second time after the initial rape by dismissing rape as something that is no big deal and just part of daily life. For those who are, or have been, victims of sexual abuse, and I am one of those, this is a sad reality that is never forgotten no matter how many times others say “just get over it.”

What Heidi Carlisle offers victims is an abundance of resources and links that she has very carefully researched. She points out the differences from state to state and city to city in how reported rape is handled and strongly suggests approaching the nonprofit organizations for help. While this book is geared to US readers, even those in other countries will come away more enlightened about what services to seek in their own countries. Other information that is useful to victim/survivors in any country is found in Chapter 6: it offers a huge list of suggestions for recovering from the psychological trauma of being sexually abused. Another chapter offers advice on how to keep your identity and whereabouts secret if there is a fear that your abuser might come after you. Victims outside the US should look into similar possibilities in their own area.

What victims/survivors have in Heidi Carlisle is someone who really cares about rape victims, who thoroughly understands what they have experienced and their confusion about what to do next. Sexual Assault Watchdog is a lifeline to becoming a survivor instead of remaining a victim. Quite frankly I think Sexual Assault Watchdog should be distributed throughout colleges and schools. It is a sexual abuse and rape survivor’s manual long overdue.

This is a book that I chose to read and review, not because it is a “fun” read, or a delightful subject, far from it. I’m glad I read it because I learned so much about something that people are reluctant to talk about, but it must be talked about. I’m talking about sexual assault. In Sexual Assault Watchdog: Survivor’s Guide, Heidi Carlisle gives advice to victims of this horrendous crime as only someone who has been a victim can. This makes a huge difference compared to the advice of well meaning people, whether family, friends or sympathetic professionals who just haven’t been there. Heidi has an authentic voice and I think it will have a huge impact on somebody’s life. She wrote this book to help. I think she will.

Sexual Assault Watchdog: Survivor’s Guide is well written and easy to read. Just as importantly, it is well organized so the reader can find the information he or she needs in a timely manner. It starts with a look at how our culture and society views the problem, and how this view can sometimes be an obstacle to victims and an impediment to those who genuinely want to help. There is also a lot of information in Sexual Assault Watchdog about free resources available to victims at levels ranging from State to Federal. Heidi Carlisle also talks about her personal experience and offers encouragement and comfort. I hope I never need this book. I hope no one else ever does. But they will. I’m glad it’s there for them.

Sexual Assault Watchdog: Survivor’s Guide is a personal account of the emotional trauma experienced by author Heidi Carlisle. According to Ms. Carlisle, society as a whole is a harsh judge of sexual assault victims. She explained that 98% of rapists do not serve any jail time! She further related that she was raped and the court chose to believe the actual rapist’s account of the assault and not her own. Most rape victims like herself are treated like second class citizens when they are interviewed by uncaring, insensitive personnel, especially those in the court system. She referred to this treatment as rape culture, as most victims feel as though they are being raped again (emotionally) by the system. Ms. Carlisle is really championing the rights of other victims. She provides helpful tips for everyone to follow so as to regain a normal life after a sexual assault.

Sexual Assault Watchdog: Survivor’s Guide is an extremely revealing book. I love the fact that the author chose to be brave and educate the public about the intricacies of the court and government systems. I also love the bright colours of the book cover. In my mind, the drawing of the sun signifies hope for all sexual assault survivors. It is so important for all readers to realize that, through this novel, help is literally a page away. The language used is semi-formal to reflect the serious message being conveyed. The inclusion of actual addresses and contact information for the non-profit and governmental agencies is an added bonus. This wealth of information provided by author Heidi Carlisle could turn out to be a life saver for victims of rape. Overall, Sexual Assault Watchdog: Survivor’s Guide is an eye opener. I applaud Ms. Carlisle for extending her courtesy by writing this novel to assist victims of sexual assault worldwide.